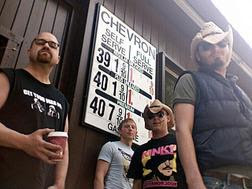 Matthew Grimm is the former lead singer of The Hangdogs, whose Bonus Army anthem, "Anacostia," I featured here a few weeks ago. Grimm has since moved on with a new outfit whose name I absolutely love. The Red Smear's best song is this little ditty, "Kill the Poor," from the album, Dawn's Early Apocalypse (really!), which rather wears its sentiment on it's sleeve--but is still a catchy tune (and is NOT a cover of the Dead Kennedys song of the same name). The song sounds like it was recorded just for the Occupy Movement, but was actually released in 2005, right at the height of the bubble years.