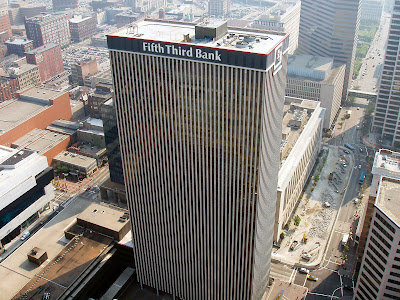 The late great author and blogger Joe Bageant had a very simple phrase to describe the Wall Street, banking and business elites who really run this country: The Bastards. Normally, The Bastards make an effort to disguise their naked wealth grabs with some kind of flimsy, business school approved smokescreen. Then there is The Bastard who is the CEO of Fifth Third Bank. First, lets take a look at this layoff notice that appeared Thursday in the Business Courier of Greater Cincinnati:


Fifth Third Bancorp conducted a round of job cuts impacting fewer than 200 employees across the company.

Downtown-based Fifth Third made the moves over the past 10 days, company spokeswoman Debra DeCourcy said. They occurred across its 12-state footprint.

The layoffs totaled “far less than 1 percent of our 22,000 employee population,” DeCourcy said.
That would put the total well below 220. She didn’t provide other details of the layoff.

Hmmm...that doesn't sound so bad. What was the official justification for the move?


DeCourcy explained the moves last week in an email responding to questions about rumored layoffs at Fifth Third:

“Our philosophy is to continually manage the deployment of staff and make adjustments where needed based on a variety of issues, including business demand, workload or technological advances,” she wrote in the email. “While we have had to reduce staff from time to time, this philosophy has enabled us to keep those numbers small relative to the overall size of our workforce of approximately 22,000 employees.”

Fifth Third and other banks have been cutting expenses lately to battle declining revenue. Fifth Third’s expenses rose 5 percent in the fourth quarter while revenue fell 6 percent. Several analysts said the bank, like many others in the industry, had already started to cut expenses and would need to do more trimming of costs.

All right, some typical Corporate FlackSpeak there, but nothing too extreme. Looks like they had to adjust to changing business conditions, right?

But wait, let's back up a week or so to an article from the very same publication, which appeared on February 28th of this very year:

Kabat made $4.8 million in 2010, which represented an 8 percent pay cut from the prior year, according to figures reported in Fifth Third’s newly released proxy statement. Pay figures exclude a change in pension value and nonqualified deferred compensation earnings, even though the company has to report those figures to shareholders.

You can try to spin these two stories any way you want, but there is no other conclusion you can reach other than The Bastard CEO ordered the firing of over 200 of his employees so his bank could afford to give The Bastard a nice fat pay increase. I'll admit I never attended business school, but maybe some MBA out there could explain what possible justification there is for giving a CEO a 49% pay raise during a year when revenues declined by 6%. Good luck putting lipstick on that very ugly pig.

But wait, it gets worse:


Kabat can thank the bank’s repayment early last year of $3.4 billion it borrowed through the U.S. Treasury’s Troubled Asset Relief Program for part of the increase. That got the downtown-based banking company out from under federal restrictions on executive pay and allowed its executives to again qualify for bonuses and additional long-term incentive pay.

Kabat’s salary actually fell by almost half, to $1.6 million, last year, according to the proxy statement. That’s because the company halted its phantom stock program last year after it paid back TARP. Those phantom stock awards counted as salary. But his stock awards rose by two-thirds, to $2.6 million. He also received $1.8 million in stock appreciation rights, which Fifth Third couldn’t pay last year due to TARP. And he received incentive pay of $855,000 that was pro-rated to pick up where the phantom stock program left off.

Once Fifth Third paid back TARP, the compensation committee returned its pay structure to a mix of salary, bonus and long-term incentives “that is more consistent with its long-term approach and compensation philosophy,” said company spokeswoman Debra DeCourcy.

In other words, The Bastard's cushy CEO gig wouldn't even exist if taxpayers hadn't bailed out his asshole bank. And just how much of a pathetic toadie is company spokeswoman Debra DeCourcy? I got news for you, Ms. DeCourcy, you may think you have a great gig being the mouthpiece for The Bastard, but if the day should come when your salary is the one standing between him and his unjustifiable millions in compensation, you'll quickly find your ass out on the unemployment line as well. Because the first rule of business in modern day America is: The Bastards ALWAYS win.


Bonus: These are the kinds of Heartless Bastards I prefer. Play it, James