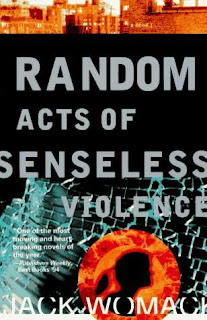 Lots of people in the Peak Oil community constantly speculate what our resource depleted future is likely to resemble. Optimists like the excellent writer/blogger Charles Hugh Smith see it as an opportunity for the renewal of the human spirit. But while I'm a huge fan of Charles, I just don't see things ending well for us.

That said I present for your consideration Jack Womack's bleak 1993 novel, Random Acts of Senseless Violence. Womack wasn't writing about a post-Peak Oil future, but the frightening narrative he did produce might very well have taken place in it. Twelve year old Lola Hart is given a diary for her birthday and thus begins the first person saga of young girl living in Manhattan as TEOTWAWKI draws closer and closer.

We watch through young Lola's eyes as madness and violence swirl around her. As the story develops, her family become increasingly imperiled as her father loses his job and they are forced to move from their nice apartment to a neighborhood on the edge of the increasing anarchy. Things continue to slide downhill as Lola joins a street gang and goes from an observer of the mayhem around her to an active participant.

Meanwhile, America is burning as the markets crash, Presidents are assassinated and the government is in chaos. It all leads to an ending as harrowing as any novel I've ever read. Not for the faint of heart, Random Acts of Senseless Violence graphically portrays one possible future scenario that demands to be taken seriously.
Posted by Bill Hicks at 10:01 PM No comments: