No, it was Wal-Mart's OPENING that "Crippled" Pico Rivera, California 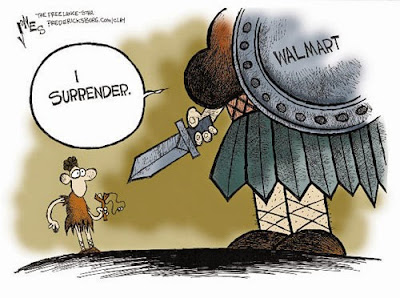 The business world was aflutter with the recent announcement by Wal-Mart that it was closing five stores around the country due to "plumbing problems," but more likely because of union activism among the employees of those stores. One article about the closures was even entitled, Wal-Mart's sudden closure has crippled a California city:


Wal-Mart's sudden closure of a store in Pico Rivera, California, has devastated the city.

The store was the city's second-biggest employer, and its closure resulted in the laying off of more than 500 workers, The Los Angeles Times reports.

The store also generated about 10% of Pico Rivera's sales tax revenue, or about $1.3 million annually, according to the report.

Now hundreds of laid-off employees are trying to find work while city officials scramble to plug the gap in revenue.

"It's a severe blow to our community, certainly, with the local economy, the homes and families, in terms of those people that were counting on those paychecks," Mayor Gregory Salcido of Pico Rivera told the Times.

With all due respect to the hardships being experienced by the Wal-Mart employees and by the citizens of Pico Rivera, it was not the closing of the Wal-Mart store that caused this crisis but the fact that the store was allowed to be opened in that community in the first place. I've never been to Pico Rivera, but if it at all resembles my hometown of Freeport, Illinois, I'm almost willing to bet that 30 years ago it probably had a diverse and vibrant number of small retail stores--perhaps even a functioning downtown business district. Again if it was all like Freeport, that vibrant downtown or wherever the small retailers were located was likely devastated once Wal-Mart came to town, undercut their prices and forced them out of business. By allowing the big bully corporate behemoth into their community, the city fathers (and mothers) were very much complicit in setting up a situation where the town could be devastated when that behemoth chose to petulantly punish its workers for the hideous trangression of asserting that they might actually deserve a slightly larger percentage of the profits the company makes from raping the planet and destroying economic livelihoods everywhere it goes.

If the citizens of Pico Rivera were at all smart, they would raise a big collective middle finger at Wal-Mart, tell the company not to let the door hit them on the ass on the way out and begin to reopen those small businesses that the retailer replaced in the first place. But if the last three decades have proven anything, it's that Americans LIKE it when corporate America pisses on their heads and tells them it's raining. So I have no doubt that when Wal-Mart gets over its snit fit, many idiot citizens of Pico Rivera will bow, scrape and grovel, welcoming their economic exploiter back with open arms.


Bonus: "Better to live on your feet than die on your knees"