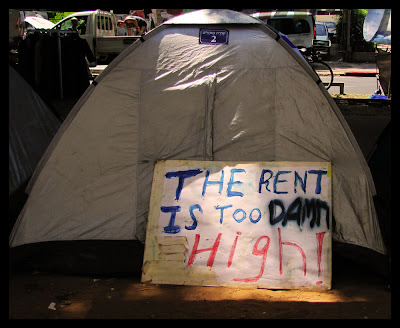 Remember all of that inane blather from President George Bush the Lesser back during the height of the housing bubble years about the "ownership society?" It was essentially U.S. government policy back then that everyone who could fog a mirror should be given a mortgage to buy their own house. Like pretty much every policy Bush touted, the "ownership society" crashed and burned and now lies in a smoking ruin as home sales remain mired near their post crash lows.

So what are all of those people who aren't buying houses doing these days? Well, if they aren't young adults still living at home with their parents, they are actually renting. Here is Slate with the details:


If you've been apartment hunting in the last few months in the U.S., you've probably noticed that many apartments seem overpriced. And with good reason: America is currently experiencing something of an apartment shortage.

According to Slate, "We’re now facing a perfect storm of demand, thanks to a growing population of empty nesters with busted 401(k)s looking to downsize and the huge backlog of twentysomethings who still need their first place."

More and more, Americans are shying away from the housing market, which has been volatile in recent years thanks to the sub-prime mortgage crisis. Rather than risk investing in a home that might lose its value, many Americans feel more secure living in an apartment setting.

Okay, here is where I have to interrupt for a moment, because I would really like to know what basis the author of this piece has for asserting that the reason so many more Americans are renting rather than buying is because they "feel more secure living in an apartment setting." There is no reason to believe that people who can still afford to buy a house won't do so, since home ownership still, despite the housing crash, represents the very cornerstone of the ever more tatttered American Dream. It is far more likely that people cannot AFFORD to buy, especially given the tightened post-crash lending standards.


The collapse in house-building since 2006 has been massive. Meanwhile, the population has kept on growing. The only reason we have enough space for everyone to live in is that so many broke young people are living with their parents. According to a recent Goldman Sachs analytic note, during the past four years, America has added 2.7 million “shadow” households—young people living with parents or siblings who under normal conditions we’d expect to be heading their own households.
The cause of this decline in household formation isn’t mysterious: It’s the joblessness, stupid. But now that the economy’s back to creating jobs, people are going to want to get places of their own.

That’s going to mean even more demand for rental apartments at a time when vacancy rates are at their lowest level since the dot-com era. During ’90s and aughts, we consistently built fewer buildings with five units or more than were normal in the ’70s and ’80s. The country has been on a decades-long drought of large-apartment-building construction. We’re now facing a perfect storm of demand, thanks to a growing population of empty nesters with busted 401(k)s looking to downsize and the huge backlog of twentysomethings who still need their first place.

That sentence I bolded at the end of the first paragraph is a good indicator of what is really happening during this so-called "recovery." Yes, jobs are being created, but they are mostly lower paying positions without good benefits. If that were not true, the people who have been hired would no doubt be out there looking to buy rather than rent. It's a cruel irony that those same folks are being squeezed by a shortage of apartments when there are so many vacant houses out there.


Bonus: Even during the height of the hippie years, owning your home was a dream worth singing a song about