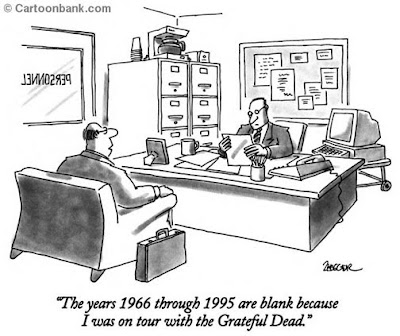 I'm actually not one who puts very much stock into generational stereotypes. It seems to me that arbitrarily grouping a set of people born over a two decade period who come from the full spectrum of backgrounds and experiences to make generalized statements about their attitudes and behaviors is not terribly valuable. When considering the Baby Boomers, for example, the formative experiences of someone born right after World War Two who spent their college age years either fighting in Vietnam, protesting it or getting deferments going to business school, and someone born the year after Kennedy was shot who didn't come of age until Reagan's first term were about as different as digging the Beatles versus Duran Duran. Not to mention that a suburban kid raised in a big house on a leafy cul-de-sac was always going to have very little in common with a black or Hispanic kid raised in an inner city high rise housing project, even if they happened to be born in the exact same year.

I wrote the disclaimer above because the article I'm excerpting below from the Toledo Blade leans heavily on such generational stereotypes. Despite that flaw, it is still quite enlightening:


For most of their lives, baby boomers knew an America ascendant, a nation that incited their occasional fury but rarely let them down.

Fueled by new ideals and rock and roll, they created a counterculture, protested the Vietnam War, and marched for civil rights.

Through it all, the boomers radiated optimism, and why not? After swelling the college ranks, they moved up with each new degree and contact, becoming the yuppies who laid the foundation of the business world.

Then came the Great Recession, a calamity emerging as another defining moment for a fabled generation.

The worst economic crisis since the Great Depression hurt young and old, but it saved its harshest slights for the children of the baby boom, the demographic bulge of Americans born from 1946 to 1964.

Seemingly overnight, members of a generation once called forever young have been made to feel overpaid, overexperienced, and overaged. Baby boomers suffered layoffs and setbacks at record rates in recent years.

Many will never fully recover, having lost too much too late in life.

That collective sigh gathering in Ohio and other graying states comes from a vaunted generation suddenly fearful and bewildered.

Unemployment spiked for all age groups in the recession, and it remains highest for young workers. But displaced baby boomers face their own special purgatory. Once they are unemployed, older workers are out of work longer. And the older they are, the harder it is to get back to hard-earned careers.

Many a Woodstock alumnus has slipped into the era's most dreaded classification: long-term unemployed.

A recent national survey found that job seekers 55 and older had been out of work a numbing 56 weeks, which is 20 weeks longer than the average furlough for younger job seekers. More than half of older job-seekers were considered long-term unemployed, having been out of work six months or more.

Throw in plummeting home values, diminished 401(k) plans, and threats to Medicare and Social Security, and it's no wonder many baby boomers now look warily toward retirement and question what happened to their world.

"We find ourselves at the vortex of a perfect storm," said Frederick Lynch, a sociologist who forecasts a contentious future for boomers in his book One Nation under AARP: The Fight Over Medicare, Social Security and America's Future.

Older workers are also, according to the stereotype, slower to embrace new technology and new ways of doing things. That can make landing a job far tougher for an unemployed 50-year-old, especially with younger generations swelling the crowd.

Dallas Davis, an unemployed sheet-metal worker in Cincinnati, took computer classes while looking for work and touted his new skills at job interviews. "But the job market is so different now," Mr. Davis, 53, said. "Instead of being one of five people, you're one of 100, or one of thousands going for the job."

For many of the nation's 78 million boomers, retirement planning has been replaced by crisis planning. Those without jobs are scrambling to find one. Those with jobs are hanging on tight.

"I think we're going through this huge fundamental change," Mr. Lynch said. "We thought we would have our parents' lives. Then came this earthquake that many people still don't see."

The article continues on with a number of interviews with different hard up Boomers who have been slammed by the economic crash, but you get the idea.

Putting aside the silly generational stereotypes, there is one important observation that needs to be made about those Americans who were born between 1946 and 1964. These are people who had the amazing good fortune to be raised and come of age within the greatest period of economic expansion ever seen in human history. Yes, some were born into abject poverty, but during this period climbing up the ladder out of destitution was also less difficult than at any other historical time and place.

My point is that even the youngest Boomers had approximately a quarter-century of working adulthood during this time of unparalleled plenty. The fact that so many of them have become destitute so quickly now that the debt fueled bubble has popped for good speaks huge volumes about the average person's ability to prepare, plan and, yes, save for the future.

Please realize, however, that I'm not singling out the Boomers as if they are at all inferior in character and judgement to those who came either before them or after them. I'm sure that given another 20 years of such prosperity my peeps, Generation X, wouldn't be any better off on average were the crisis to hit as we are getting ready to retire. Though most Boomers will never recognize the fact, they won the generational lottery, and the prize was that they got to live most of their lives during a time of fantastic cheap oil fueled abundance the likes of which the world has never seen nor will ever see again. That so many of them squandered that great gift...well, chalk it up to human nature, I guess.


Bonus: Yes, Boomers, now it really is the beginning of a New Age, just not the one most of you were expecting as you reach your golden years