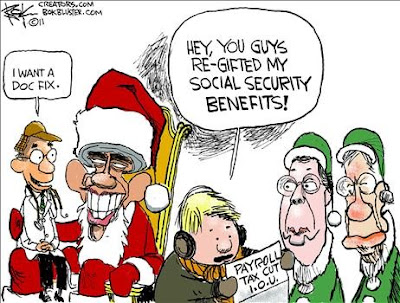 I've written several times here at TDS warning about the dire state of the Social Security program and the reckless irresponsibility of President Hopey-Changey in cutting the payroll tax just to give the economy a short term boost and help his reelection chances. My previous writings on the subject are contained here:

Unfortunately, the lie about the supposed solvency of the Social Security program because trillions of dollars in payroll tax "surpluses" were allegedly squirreled away in the Social Security Trust Fund just won't die easily. If there really is all that money available in the fund, perhaps someone would care to explain away this story that appeared Tuesday in the USA Today:


The payroll tax cut recently enacted by Congress and signed by President Obama will increase the federal budget deficit this year, the Congressional Budget Office says.

What's more, the deficit is likely to be a little deeper than estimated in 2013 and 2014 as well.

The agency's latest report, which updates its forecast from January, shows a likely deficit this year of $1.2 trillion, rather than the $1.1 trillion originally projected. It shows the deficit declining to $1 trillion in 2013 and $953 billion in 2014, both a bit higher than January's forecasts.

Those gloomy figures are based on what CBO calls its "alternative fiscal scenario." Its basic projections are much rosier but are based on existing laws, rather than likely changes.

Because Congress and the White House are almost certain to extend expiring tax cuts and avoid Medicare payment cuts to doctors, for instance, the alternative scenario becomes more likely.

Most of the changes in the report are due to the extension of the 2-percentage-point payroll tax cut through the end of this year.

You really don't have to be a genius or a savant to figure out that if the Social Security trust fund really existed, then the payroll tax cut would not be adding to the current federal deficit. The sad fact is that your "leaders" used a quarter-century's worth of payroll tax surpluses to hide the true size of the federal deficit during that whole time period. Now the bill is on the table, and the diner has nothing in his pockets but lint and IOUs.


Bonus: "You just sat there taking everything you could get...you never dreamed that one day you might have to pay for it"