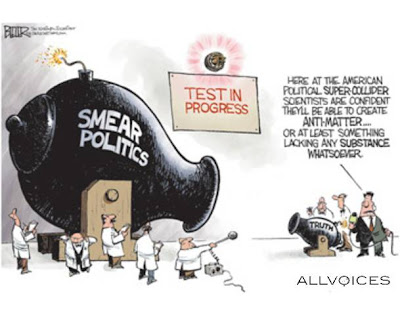 On Monday, I called out Harvard Historian Niall Ferguson for deliberately confusing cause and effect in a recent column he wrote warning of a potential U.S. collapse. As it turns out, Ferguson isn't the only one engaging in such a basic intellectual fallacy when trying to diagnose what ails America these days. The banal spectacle that has been the race for this year's Republican presidential nomination has flummoxed a lot of Washington insiders, and they are now desperately looking around for someone on whom to place the blame.

Richard Cohen, for those of you who have been fortunate enough not to ever have been exposed to what he calls his "journalism," is a tired old media whore of an op-ed columnist still scribbling for the neoconservative dominated Washington Post who should have been put out to pasture a long time ago. Incredibly, Cohen is still coasting on his reputation as a supposed liberal, despite writing this hideous passage in the run up to the Iraq War:


"...the evidence Colin Powell presented to the United Nations — some of it circumstantial, some of it absolutely bone-chilling in its detail — had to prove to anyone that Iraq not only hasn't accounted for its weapons of mass destruction but without a doubt still retains them. Only a fool — or possibly a Frenchman — could conclude otherwise."

So who is the fool now, Richard, you fake liberal fuck? The very least you could have done after getting that particular call so wrong and seeing the policies you were responsible for advocating from your influential position as a Washington pundit be responsible for the deaths of at least several hundred thousand people is resign. But no, as I've written before on this blog, being a highly paid mouthpiece for the empire completely insulates one from ever having to be accountable for anything they say.

Anyway, Cohen continues to slog along, polluting the collective consciousness with his regular newspaper columns. His latest such effort sees him trying to lay the blame for the horrid state of American politics in a piece entitled, "Sarah Palin’s Foolishness Ruined U.S. Politics":


At some point while watching HBO’s absolutely smashing (and terrifying) movie “Game Change,” it occurred to me that Sarah Palin has ruined America. The movie has been scalloped out of the book by the same name and focuses on Palin, rather than on the entire 2008 presidential campaign. The decision to do so was absolutely correct. With her selection as John McCain’s running mate, American politics lost its way — and maybe its mind as well.

The movie portrays Palin as an ignoramus. She did not know that Queen Elizabeth II does not run the British government, and she did not know that North and South Korea are different countries. She seemed not to have heard of the Federal Reserve. She called Joe Biden “O’Biden” and she thought America went to war in Iraq because Saddam Hussein, not al-Qaeda, had attacked on Sept. 11, 2001. Not only did she know little, but she was determinately incurious and supremely smug in her ignorance.

At the same time, she was a liar. In the movie, she was called exactly that by McCain’s campaign chief, Steve Schmidt, who came to realize — a bit late in the game — that one of Palin’s great talents was to deny the truth. When confronted, she simply shuts down — petulant, child-like — and then sulks off.

Palin objects to this characterization — as does McCain — but the movie has been endorsed by too many of Palin’s top campaign aides to put its veracity in doubt. Some of them had come to revile the Alaska governor — enough to leak some awful facts but not quite enough to go public. Had the election been really close, I wonder if they would have run out into the street yelling that Palin — a heartbeat away from the possible presidency — was a monster. Everybody loves their country. Some people love their careers even more.

All this is now history, I want to say. But then I must instantly correct myself. Apres Palin has come a deluge of dysfunctional presidential candidates. They do not lie with quite the conviction of Palin, but they are sometimes her match in ignorance. As with Palin, it seemed hardly to matter. Herman Cain for a while was a front-runner. He had a nonsensical tax plan, zero knowledge of foreign affairs and had never held elective office. Yet, for a brief but terrifying moment, many Republicans were saying he should be the next president of the United States.

Michele Bachmann told a touching fib about vaccinations and Rick Perry did not know squat about who governs Turkey, a NATO ally and a vitally important Middle East power. He got wrong the number of justices on the Supreme Court — he said eight — and could not remember a Cabinet department he had vowed to eliminate.

Rick Santorum knows his stuff, but his stuff includes a wild denunciation of John F. Kennedy’s famous speech about the proper role of religion in public life and a characterization of President Obama as a snob for extolling the value of college. Newt Gingrich has the wattage to be president, but so does Hannibal Lecter, if you get my drift. As for Ron Paul, he appears to be running for president of some theme park.

I have excluded Mitt Romney from my list of fools and knaves. (He has other problems.) But there once was a time when Romney would not have stood out as the only candidate who knew something about the issues that confront a president. Since Palin, though, ignorance has become more than bliss. It’s now an attribute, an entire platform: Vote for me, I know nothing and hate the same things you do.

Palin is no longer an anomaly. McCain didn’t choose her for her intellectual or experiential qualities, nor because he was geographically or ideologically balancing the ticket. She was an antiabortion woman with a pulse: Enough! She, like the out-of-nowhere Obama, had the stuff of celebrity — the snap, the dazzle, the self-assurance, the sex appeal. She didn’t need to dance with a star. God told her she already was one.

I'll take a back seat to no one in my loathing of Sarah Palin. It is certainly true that she was completely unfit to be nominated for Vice President and she is every bit the shallow, vain, willfully ignorant, attention whore huckster that she appears to be. But Sarah Palin is in no way, shape or form responsible creating the political environment in which John McCain felt compelled to put her on the tickert with him. That's like blaming melting glaciers for climate change.

The real reason U.S. politics is "ruined," as Richard Cohen laments, is because for over 30 years now, since the election of one Ronald Reagan, the media in this country, including the likes of Richard Cohen, have refused to call out the manifest lies that have dominated our political discourse. Once Reagan and his minions found that he could say whatever stupid bullshit he wanted to say that sounded good to the public without being held accountable, the stage was set.

Every election cycle since then, aspirants for national office both Republican and Democrat have had to blow more and more smoke up the voters' asses in order to get elected. For the right wing, this has meant that its candidates have constantly needed to one-up each other on being as proud of their ignorance as Reagan once appeared to be. Reagan begat George W. Bush, who begat Sarah Palin, who begat Herman Cain. It really is that simple.

Making matters worse, in the wake of 9/11 the media took the extra step of climbing right into bed with those in charge. It is one thing when a politician lies in order to get elected and the media does not call him or her out on it. It is something else again when a president lies in order to go to war without justification, subvert the constitution in the name of "homeland security" or to enact economic policies designed to enrich the one percent at the expense of everyone else. When the media acts as a compliant lap dog in the latter scenario, it creates a climate in which the average citizen does not have any earthly idea what the truth really is, so they will be extremely susceptible to be taken in by demagogues like the former Alaska governor who skillfully push their emotional buttons. Throw in the media's incessant celebrity-obsession designed to distract the masses and you have created the perfect conditions for scum like Palin to survive and thrive.

So my advice to Richard Cohen, given his own sorry ass record, would be to stop looking around for convenient scapegoats to point the finger at for America's "ruined political landscape" and instead start looking in the mirror. You and many of your professional colleagues did as much as anyone to create this Frankenstein monster, and now all of us are going to have to live with the potentially very dire consequences.