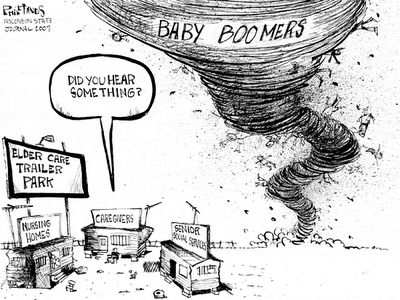 The realization that America faces a dire demographic crisis in the 21st century as the bulge in population known as the Baby Boomers reach retirement age is hardly new. It was most dramatically spelled out in the 2004 book, The Coming Generational Storm: What You Need to Know about America's Economic Future, by Laurence J. Kotlikoff and Scott Burns. So what has Spoiled Rotten Nation done to prepare itself in the eight years since Kotlikoff and Burns's dire warning? Jack shit, of course. And now, even the befuddled mainstream media is starting to notice, as shown by this article from USA Today:


Few communities have started to think long term about how to plan and redesign services for aging Baby Boomers as they move out of the workforce and into retirement.

Even more troubling, dwindling budgets in a tight economy have pushed communities to cut spending on delivering meals to the homebound and shuttling folks who can no longer drive to grocery stores and doctor's offices.

These cuts, advocates for older Americans say, are coming when the services are needed more than ever. And those needs will grow tremendously over the next two decades.

The nation's population of those 65 and older will double between 2000 and 2030, according to the federal Administration on Aging. That adds up to one out of every five Americans — 72.1 million people.

Just eight years from now, researchers say, a quarter of all Ohio's residents in half of the state's counties will be 60 or older. Arizona and Pennsylvania project that one in four of its residents will be over the age of 60 by 2020.

"The bottom line is, the Baby Boomers are hitting," Chuck Gehring of LifeCare Alliance, an agency serving seniors in central Ohio, told The Columbus Dispatch. "Are communities prepared for this? No."

The whole article is fairly lengthy and worth reading in its entirety, but I thought I would just jump right to the punch line:


"There are a lot of communities that recognize they need to do something but haven't done it yet," Sandy Markwood, the group's chief executive officer, told the Associated Press.

Some of the changes cities can make include offering training to help older people drive more safely, installing road signs that are easier to read or creating ride-share programs, said Jo Reed, who oversaw the latest survey.

The biggest reason why cities have made little progress is the economy.

Nearly 21,000 times last year, drivers for the Licking County Aging Program in Ohio took elderly residents in communities east of Columbus to medical appointments. The gasoline bill has more than doubled in the past four years, topping $7,000 a month.

Uh-oh...Houston (and everywhere else), we have a problem.

As the article explains in great detail, local communities all across the country are woefully unprepared to provide services to a rapidly aging population. Just like Kotlikoff and Burns warned years ago, government at all levels is having a very difficult time wrestling with this issue at a time when the ratio in the number of workers paying taxes to the number of retirees is quickly shrinking. But there was one very important factor they neglected to consider in their book that is dramatically illustrated by the section of the article I bolded above: the hugely negative economic impact of high energy costs.

Kotlikoff and Burns estimated that this problem would reach crisis proportions by around 2030. I think it is pretty clear, however, that their calculation is going to be off by at least a decade or so on the short end. Not only are governments at all levels under pressure from high energy costs, but young adults are finding it increasingly difficult even with a college education to land the kind of secure, good paying jobs that will allow them to pay taxes at a rate which will support the expensive programs for retirees. In the past four years, the federal government has papered over this crisis by increasing its annual deficit spending by nearly a trillion dollars per year. When we finally reach the point where it can no longer borrow such insane amounts of money, it is pretty obvious that the programs retirees are counting on to support them will quickly collapse.

Like other reality based prognosticators going all the way back to the 1970s, the warnings of Kotlikoff and Burns went largely ignored as Spoiled Rotten Nation covered its ears and continued partying like there was no tomorrow. Well, tomorrow is just about here, and there are going to be literally tens of millions of older Americans who are going to be very sorry that they didn't listen.