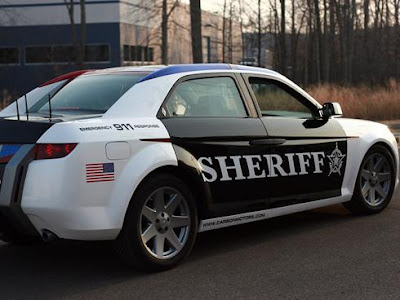 Looks like the effects of the Solyndra scandal are rippling outward...which I consider to be a good thing as it will prevent more taxpayer money from being wasted on "green energy" boondoggles. Here is the USA Today with the story:


The dream of a purpose-built, fuel-efficient police car may be in jeopardy. The Energy Department has denied the application of an Indiana start-up for a $310 million loan that would have created its advanced police car.

Carbon Motors is pushing a police pursuit car it calls the E7. It says it has over 20,000 reservations from more than 500 law enforcement agencies in all 50 U.S. states, in addition to interest overseas. It says the car's creation would have resulted in 1,550 direct jobs.

Carbon has been waiting for years for the loan under the same program that provoked the outcry about the loan to solar-panel provider Solyndra. That company's financial problems provoked a Republican outcry about wasteful spending by the Obama administration.

Finally, someone is actually watching over the till and not just throwing hundreds of millions of dollars in federal loan guarantees around willy-nilly. But of course, that isn't how the company sees it:


An "outraged" Carbon, in a statement, blames DOE for bowing to election-year political pressure in not granting the loan.

"It is clear that this was a political decision in a highly charged, election-year environment," said William Santana Li, chairman and chief executive officer, Carbon Motors. "Carbon Motors simply appears to be the last victim of this political gamesmanship."

Other start-ups that were waiting for DOE loans have also failed. Bright Automotive, which was going to make a fuel-efficient van, just announced it can no longer stay in business without the loan. Aptera, a Southern California-based start-up, failed earlier this year and won't make its unusual pod-like electric car.

So when exactly did American businesspeople become such a group of whiny ass little titty babies? If your electric police car idea was so fucking great, Mr. Li, I would gather that banks would be lining up to loan you the money for it without the federal government having to backstop them. The fact that they aren't speaks volumes in my opinion. In case you haven't noticed, we've got a trillion dollar plus federal deficit to contain, and this is as good a place to start containing it as any.


Bonus: Dedicated to Carbon Motors Chairman and CEO William Santana Li, a song by The Babys. Maybe he can stop looking for a handout, pull himself up by his own bootstraps and get back on his feet again