More Seniors Using Reverse Mortgages to Raise Cash, And At A Younger Age 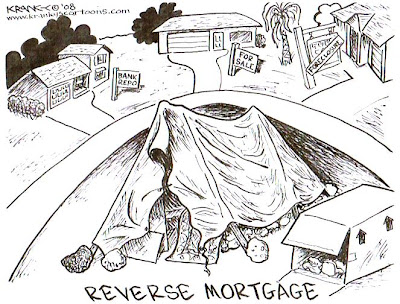 Yet another sign of the economic distress being felt in the real world beyond the manipulated stock markets was seen in this story that appeared on Friday on CNBC:


Finding themselves financially strapped, more seniors at an earlier age are trying to get reverse mortgages on their homes in order to survive, according to a new report.

The study says the percentage of people aged 62 to 64 applying for reverse mortgages has increased 15 percent since 1999.

The reason for the dramatic upswing among 'younger' seniors is simple, the report concludes: They need the money.

"The average age for taking out reverse mortgages has been around 71," explains Sandy Timmerman, director of the MetLife Market Institute who conducted the survey with the National Council on Aging.

"But with job losses, higher debt and living costs, more and more of the 'younger' seniors are looking at reverse mortgages as a way to pay their bills and keep their homes," Timmerman adds. "It shows the devastation some seniors have gone through since the financial downturn."

Reverse mortgages—which allow homeowners to borrow against the value of their homes—have been around since the early 1960's, but have grown in popularity. TV commercials with celebrities like Henry Winkler, Robert Wagner and Fred Thompson promoting reverse mortgages, are rampant during weekends and late night viewing hours.

But whether it's the ads, the financial necessity, or both—reverse mortgages have become attractive to more seniors. In 2010 alone, more than 80,000 Americans over 62 years old finalized a reverse mortgage. That's up from 25,000 in 1995.

'It's not surprising that more seniors are doing this at an earlier age," says Karl Byrd, CFP, vice president at Security Ballew Wealth Management. "We live in a time when people are not planning for their retirement or can even get out of debt. Some seniors can't even buy groceries right now."

I love that little "blame the victim" statement right there from Vice President Karl Byrd of Security Ballew Wealth Management. Have some people foolishly failed to save for retirement despite the fact that they could have easily afforded to do so? Undoubtedly. Are there plenty of others who saw their nest eggs kicked in the balls by the housing and stock market crashes perpetrated by parasitic Wall Street scum? Without a doubt.

The article continues on to describe the pain many seniors are feeling that is forcing them into reverse mortgages:


Another warning signal—reverse loans can use up all or most of the equity and leave seniors with fewer assets as they grow older. And the loans are geared toward older seniors. The older someone is, the more credit is available. That's why most reverse mortgages have been taken out by people in their 70's. That is until now.

"Weaker economic conditions are pushing 'younger seniors' to go for any amount of money they can get at an earlier age," says Timmerman.

"The people we surveyed in the younger age range applying for the loans were clear about their needs for financial help," Timmerman says. "They didn't seem like they could wait."

At a time when more seniors in the U.S. are facing poverty—some 15.9 percent are considered poor— it's not surprising to see the move to reverse mortgages, says Mark Goldman.

"I saw a an older woman at the drug store the other day, asking her pharmacist to please cut the costs of her medicine," Goldman adds. "When you see seniors facing rising health care costs, and as they lose jobs and see 401(k) returns shrink, it's going to be tough not to look at a reverse loan."

And of course, those who do will have very little, if any, wealth to pass on tho their younger heirs who may themselves be struggling with massive student loan debts, underwater mortgages or job losses. As a result, more and more middle class American families will gradually see their wealth permanently evaporate as the downward spiral resulting from the death of or cheap oil-based economy slowly strangles the tattered remnants of the American Dream.