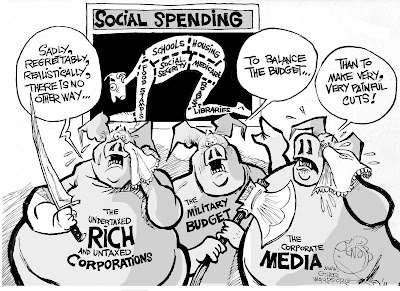 The Pentagon War Pigs know that they are starting to lose the battle in the court of public opinion. After two lost wars in one decade, it's about time that the average mope citizen woke up to the fact that the biggest reason their government is running trillion dollar plus annual budget deficits at a time in which programs that benefit Americans are being frozen if not slashed is because of the out-of-control, five-sided monster on the banks of the Potomac.

As I've stated repeatedly on this blog, America's level of defense war spending is absolutely insane. Including indirect costs, the total is approximate to what every other nation on earth spends on war. What's more, four of the next six nations in war spending, including Great Britain, France, Germany, Japan, are currently aligned with the U.S. We could slash Pentagon spending by at least three-fourths and still be utterly safe from conventional military attack.

Now the Pentagon is playing the one political card it hopes will carry weight in these difficult economic times: the loss of jobs that would result if the budget cutting deal reached by Obama and the Republicans last year are allowed to take effect. Here is Reuters with the story:


The Pentagon said on Thursday it would expect hundreds of thousands of layoffs across the defense industry if lawmakers did not take action to avert an additional $500 billion in defense budget cuts that could take effect in January 2013.

Frank Kendall, the Defense Department's acting undersecretary for acquisition, technology and logistics, said the cuts would force the Pentagon to break many hard-won contracts with industry, including a multibillion dollar deal with Boeing Co for development of a new refueling plane.

The Navy's contracts with Lockheed Martin Corp and Australia's Austal Ltd for littoral combat ships would also be vulnerable if the mandatory cuts, known as sequestration, took effect as planned, Kendall told the Senate Armed Services Committee at a confirmation hearing to stay in the job.

Kendall said the defense industry would face fairly deep cuts applied indiscriminately, rather than on a targeted basis, given the way the Budget Control Act was worded.

The Pentagon last month unveiled a budget proposal for fiscal 2013 that would begin to implement $487 billion in spending cuts that the White House and Congress agreed to make, spanning the next decade. If lawmakers did not come up with $1.2 trillion in other deficit-reducing measures, the Pentagon would have to cut its proposed funding by another $500 billion.

Kendall said there was a good chance that President Barack Obama would use a legal clause to exempt the personnel accounts from the cuts -- which would increase the burden that would fall on spending for new weapons, research and development programs and upgrades for older weapons.

"A lot of the work that we're done over the last couple of years to try to make more efficient acquisition decisions and get better contract structures would be broken," he said.

Kendall said the cuts would ripple through all tiers of the defense industry, hitting small and medium-sized businesses particularly hard.

He said some of the biggest companies in the sector had already approached him with concerns about having to provide advance notice of potential layoffs given the uncertainty caused by the current budget situation.

Conservatives like to bash so-called "welfare queens" every chance they get, even though the average person on welfare actually receives a tiny pittance compared to what is paid out to defense contractors every year. Right here in this article you can see who the biggest welfare queens of all really are. $487 billion in budget reductions over the next decade represents less than $50 billion per year, or put another way less than 10% of the Pentagon's current annual budget allocation. It's time to cut these fuckers off, whatever the costs to the economy.


Bonus: But of course