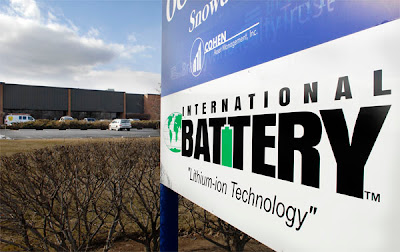 The conservatives who were trying to score political points by bashing the Obama Administration over its failed loan guarantees to solar panel manufacturer Solyndra really need to stop with the hypocrisy, because it has become readily apparent that such practices are widespread all across the country, and usually involve pro-business types at the local level. Here is the Lehigh Valley Morning Call with the latest such story:


International Battery, which opened an Upper Macungie plant in 2008 that was expected to create hundreds of jobs, has abruptly closed without explanation, workers said, surprising local officials who worked for years to attract the company to the Valley.

One worker, who declined to give her name, said employees were told Wednesday that the business was closing. Two representatives at the company's Snowdrift Road office who declined to be identified confirmed the closure Thursday. The company parking lot was nearly empty and only a few people were inside.

"We're closed," one man in the office said to a Morning Call reporter. "No one is going to talk to you about it."

Seems rather abrupt and frankly a bit rude. So what's the rest of the story?


International Battery, which makes rechargeable lithium-ion cells and batteries for the military and industrial uses, was seen as a recruiting win in 2008 when it decided to invest millions of dollars in the Lehigh Valley and create manufacturing jobs.

The state gave the company a package of incentives, including $500,000 in job creation tax credits, $500,000 in grants and a $3 million loan for machinery and other equipment. It initially employed 70 people and was expected to grow to 250 workers over three years. Officials said it represented the kind of good-paying, high-tech jobs the Valley needed.

"It comes as a very big surprise," said Phil Mitman, president and chief executive officer of Lehigh Valley Economic Development Corp., an agency whose goal is attracting new businesses to the Valley and retaining existing ones.

Mitman said the company did not come to the agency for assistance to stay in business.

Well, why should they? You handed them $3 million of taxpayer money and apparently didn't get any guarantees from them that they wouldn't just slam the door in your face any time they felt like it. Brilliant move, Mr. Mitman. Can I sign up to be your next loan recipient? I've got a great business plan for building a factory that makes saddles for unicorns.


Bonus: This video is dedicated to Lehigh Valley Economic Development Corp. CEO Phil Mitman in honor of what he thinks it is appropriate to do with taxpayer money