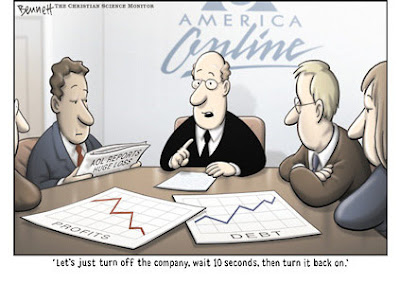 I haven't been a member of America Online since back in the days when I still had a dial up modem. So I was actually surprised to hear that the company is still a going concern. Here is the New York Times with the details:


On Friday, AOL notified more than 40 employees from its West Coast offices that they would be out of jobs by the end of the month. More cuts are scheduled in the coming weeks across AOL, according to a number of executives, who spoke anonymously because they were not authorized to speak on the matter, and former executives. The layoffs are expected to include more than 100 AOL employees.

The AOL Instant Messenger group took the deepest cut so far. A former AOL employee said the group was “eviscerated and now only consists of support staff.” This person, who asked not to be named because they were not allowed to speak publicly about the company, added that “nearly all of the West Coast tech team has been killed.”

Next up, AOL is expected to cut employees who work at Patch.com, the company’s effort in hyperlocal news. Other cuts are expected in smaller doses around the company over the next month.

In a statement given to The New York Times, AOL confirmed last week’s layoffs. A company spokeswoman declined to say how many employees had been cut.

“We are making some strategic but very difficult changes to better align our resources with key areas of growth for us as a company,” the statement said. “We remain committed to our presence in Silicon Valley and driving innovation in consumer products and mobile.”

Jason Shellen, a former director of the AOL Instant Messenger group who was based in the company’s West Coast offices and who once ran Thing Labs, was among those laid off. Mr. Shellen declined to comment, but AOL confirmed his departure.

Layoff rumors had been swirling around the company for several weeks. Kara Swisher on the blog AllThingsD reported that Mr. Shellen and Van Miltenburg, another AOL executive, would soon be let go, along with other employees.

Now if y'all will excuse me, I hear my Atari 2600 game console calling me.