Pink Slime: It's What's For Lunch At Your School 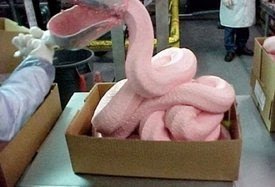 You know things are getting crazy in this country when a "food product" that has even been rejected by McDonald's is deemed suitable school lunches. Here is Common Dreams with the details:


"Pink slime," the mixture of connective tissue and beef scraps also known as "Lean Beef Trimmings," made news last month when McDonald's announced it would no longer use the controversial product. However, a report today shows that the U.S. Department of Agriculture thinks it is still a suitable product for the nation's children, as it is going to purchase millions of pounds of the product for the national school lunch program.

Okay, that sounds pretty gross. What are the particulars?

Made by grinding together connective tissue and beef scraps normally destined for dog food and rendering, BPI’s Lean Beef Trimmings are then treated with ammonia hydroxide, a process that kills pathogens such as salmonella and E. coli. The resulting pinkish substance is later blended into traditional ground beef and hamburger patties. [...]

The USDA, which plans to buy 7 million pounds of Lean Beef Trimmings from BPI [Beef Products, Inc.] in the coming months for the national school lunch program, said in a statement that all of its ground beef purchases “meet the highest standard for food safety.” [...]

...the USDA now finds itself in the odd position of purchasing a product that has recently been dropped by fast-food giants McDonald’s, Burger King and Taco Bell.

You have to love the audacity of an administration which basks in the publicity of a First Lady who is supposedly all about getting children to eat healthy that does nothing to stop practices like this. Hey, liberals and progressives, when are you going to get it through your thick skulls that Obama the champion of the people is nothing but a Hologram, and his wife is merely part of the image?

The story itself ends with a priceless quote:

“We originally called it soylent pink. We looked at the product and we objected to it because it used connective tissues instead of muscle. It was simply not nutritionally equivalent [to ground beef]. My main objection was that it was not meat.”

Nope, but I would gather that it s a lot cheaper. Which means the government doesn't have to pay as much while the company makes a big fat profit. Everybody wins. Well, except the kids, of course.


Bonus: Next up, The Jimbo Burger