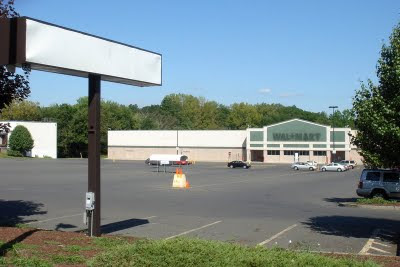 I love the smell of Schadenfreude in the morning. Smells like...Walmart biting the dust. Here are the gory details from DailyFinance:


Walmart revolutionized consumers' lives for decades. It built a successful retail empire across the country, powered by its low prices.

Hold on for just a minute. Wally World built its successful retail empire by running mom and pop stores into the ground and destroying the social fabric of communities all over the country, not to mention perfecting the business model of using precious resources to have cheap shit built in China and shipped halfway around the world using more cheap resources. It changed people's lives all right, but hardly for the better. The company is a scourge upon the Earth, and when in finally goes belly up, I for one will be dancing upon its grave.


But Walmart has failed to keep up with the innovation, and now other companies are successfully changing consumers' behaviors in a way that is slowly killing the world's most famous retailer.

Look no further than its most recent quarterly earnings report. Although it marked its second full quarter of positive same-store sales growth (albeit a measly 1.5%) after nine consecutive quarters of declining same-store sales, overall earnings still declined 13%.

Bwahahahahahahaha. So their margins are getting squeezed. Excellent! Couldn't happen to a bigger or more deserving bunch of scumbags.

So if Wally World is in a funk, who is picking up the slack?


Amazon's low prices (thanks to its low overhead expenses and no sales tax in most states) and unbeatable selection (thanks to the acquisition of companies like Diapers.com and Zappos), combined with the convenience of online shopping, have attracted a growing fan base of customers -- stealing more and more customers away from Walmart.

Even Jeremy King, the chief technology officer of Walmart, admits Walmart.com is "playing a catch-up game" with Amazon. And yet it's pretty clear that any attempts to compete with Amazon online will be futile.

That's because Amazon's reach will only continue to expand as it builds out its Kindle platform. The ease of purchasing with just one click from virtually whatever device you choose (your computer, phone, Kindle, or even Apple's iPad) will continue to attract a growing number of consumers -- again, spelling bad news for Walmart.

And how about those not going online to shop?


On the physical front, the most revolutionary Walmart killer is Costco.

Costco, a members-only warehouse chain, targets a more affluent demographic than Walmart but similarly prides itself in offering heavily discounted items. Even though Walmart has a similar arm of its business, Costco is light years ahead of Walmart's Sam's Club.

Markups on products are heavily controlled. Items can never be sold for more than 15% of cost (whereas supermarkets will mark up items by 25%, and department stores mark items up by as much as 50%). This means consumers always know they'll find unbeatable bargains. And that keeps them coming back for the majority of their shopping needs.

Shopping is easier. The smaller scope of products makes the purchase decision easier for customers. But it also generates higher sales volumes, which enables Costco to sell items quicker than they have to pay their suppliers for them -- and allows them to negotiate even lower deals with these suppliers.

Costco has a secret ingredient. The stores have an additional element that Walmart will likely never be able to replicate: the "treasure hunt." Costco constantly stocks shelves with new items available for just a short time. Customers return excited to see new offerings, and they often leave with items they hadn't intended to purchase.

Returns are never a problem. Even if shoppers later decide their impulse buys were unwise, Costco has the most consumer-friendly return policy out there, accepting returns on most products without a receipt and with an infinite timeframe.

Given all this, it's little surprise that Costco's retention rate for members hovers around 90%. This means that once a customer gets a taste for the savings -- and experience -- Costco offers, he or she will likely be a customer for life. Again, bad news for Walmart.

Ummm...there are a lot of words I might use to describe Costco, but saying it has fucking "charm" isn't one of them. The downside to this story is that Walmart's woes are not being caused by consumers finally wising up to the horrific societal costs of cut rate, cut throat retailers. In fact, all it really means is that the O.S. (Original Shark) is now getting devoured by two even more ruthless sharks. But nevertheless, it is fun to contemplate the possibility of Walmart's rapid demise and that soon all of its stores will look like the one in the picture above.


Bonus: "That place is huge and fucking horrible"