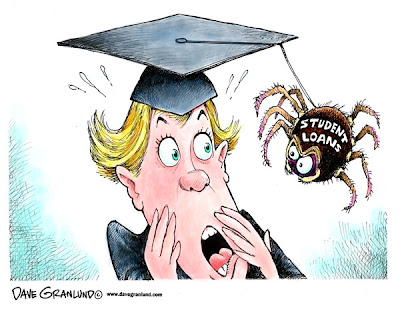 As I've said before on this blog, sometimes I hate being right. I've asserted a number of times that predatory student loans are another massive financial bubble just waiting to pop, and now here comes the confirmation from Bloomberg:


About $85 billion in U.S. student loan debt, or 10 percent of the outstanding balance, was delinquent in the third quarter of 2011.

Of the 37 million borrowers who have student-loan balances, 14 percent, or about 5.4 million people, have at least one past due student-loan account, according to a report posted today on the Federal Reserve Bank of New York’s website.

As many as 47 percent of student-loan borrowers “appear to be in deferral or forbearance,” and didn’t have to make payments as of the third quarter, according to the report. The district bank reported last week that debt from educational loans in the fourth quarter was $867 billion, higher than credit-card debt, according to a survey of consumer credit. Special attention should be paid to these student-loan delinquencies compared with other household debt, the authors wrote.

“Some special accounting used for student loans, not applicable to other types of consumer debt, makes it likely that the delinquency rates for student loans are understated,” wrote the economists, Meta Brown, Andrew Haughwout, Donghoon Lee, Maricar Mabutas and Wilbert van der Klaauw.

Note the two portions of this report I highlighted in bold, both of which indicate that the problem is far worse than the headline figure. Nearly half of the loans are held by people who are going to college right now or have just graduated, who have not yet discovered or are just now discovering how bleak their prospects of finding a good job are even with that degree the placed themselves deeply in debt to obtain. Secondly, accounting gimmicks are also likely helping to hide the extent of the problem, just like in the mortgage industry.

The big question is just how long it will take before students and their parents finally begin to realize that there has been a sea change in the economy and that a college degree is no longer a ticket to the American dream of middle class respectability. Blind faith is ll that is holding up this whole creaking edifice, but then again you could also say that about the economy at large.


Bonus: They say you gotta have faith...but you should never have Blind Faith