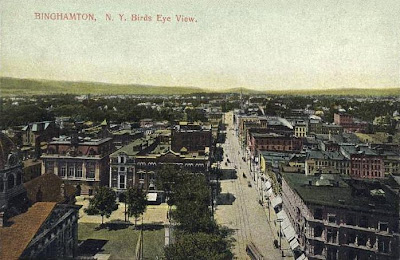 One man's pessimism is another man's realism, I always say. Here is the story from Pressconnects.com:


Maybe it's the weather, even with the relatively mild winter. Maybe it's the region's long-term economic woes. Maybe it's fallout from last year's flood that left some people and businesses struggling to rebuild or relocate.

Whatever the factors, the Gallup polling organization says we're one pessimistic bunch.

Residents of the Binghamton metropolitan area, which covers Broome and Tioga counties, are the least optimistic in the country about whether their community is becoming a better place to live, according to a Gallup poll released Tuesday.

Residents in 190 metro areas were polled for the Gallup-Healthways Well-Being index, which tracks community satisfaction and optimism on a daily basis.

People can point to the weather and the economy as reasons for pessimism, and those are valid points, said Benjamin Perkus, a psychologist licensed by the state and practicing in Binghamton.

The literal lack of sunlight does affect brain chemistry, with people suffering the doldrums from Seasonal Affective Disorder, he said.

But people's perceptions may also be a factor, he believes. "The community is rather conservative and not very open-minded, so it's stuck in the old paradigm of big industry, which is gone now, Perkus said.

This is actually kind of funny given peak oil author James Kunster's repeated assertions that upstate New York will be among the best places in the country to reside after the oil crash. I'm not saying he's wrong, just that plenty of his fellow citizens don't seem to agree.


Bonus: Patton Oswalt is NOT optimistic