Guess What, "Hunger Games" Fans, You Actually Live In "The Capitol" 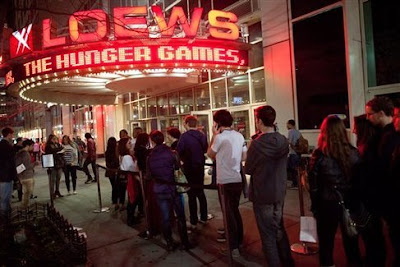 In a rare example of keeping up to the minute with our mindless pop culture, I actually spent this past Saturday night at a screening of The Hunger Games. Normally, I steer well clear of such mass produced tripe, and am actually proud to say I've never laid eyes upon Avatar, Titanic, the second Star Wars trilogy or any of the Harry Potter or Twilight flicks. But the wife has read the entire set of Hunger Games novels, and sometimes you do what you have to do to maintain domestic tranquility.

That said, I didn't hate the movie as much as I thought I might. It was actually better made than most of the garbage that comes out of Hollywood these days. My two biggest quibbles with it were that the supposedly hungry denizens of District 12 actually looked pretty well fed, and the violence was far too tamed down for such a horrific premise. Yeah, I know they needed to ensure they didn't get an R rating so that the teenyboppers could flock to see it. Mission accomplished in that regard, I guess. At least I saw it at my local art house theater, which meant that the audience was not all teenagers and that there were no blaring advertisements on the screen for the 25 minutes we sat waiting for the previews to start. At this point, I'll take any small favors I can get.

The plot of the film has become culturally omnipotent, so I won't rehash it in great detail here. It involves a future dystopia in which The Capitol long ago won a war and now subjects the 12 outlying districts to its will through brute force. The outlying districts are forced to provide the resources which allow the denizens of the The Capitol to live in decadent luxury. Every year in order to reassert The Capitol's authority, The Hunger Games pit 24 teenagers (12 boys and 12 girls) chosen by lottery against each other in a brutal fight to the death as part of a Survivor-on-steroids type reality show.

It's not surprising that this theme would have great appeal to American moviegoers, since the plot is not substantially different from that of the original Star Wars. The Capitol is the Evil Empire, and even though there is not yet a rebel alliance (to be formed in the inevitable sequels, I gather) the main character, Katniss, is a scrappy, tough and resourceful rube from the provinces just like Luke Skywalker.

The theater itself was sold out for my show, and the audience not surprisingly seemed to eat up what was on the screen. As a culture, we just never seem to tire of watching the underdog overcome long odds in a battle against the forces of evil. Yet the thing I couldn't help but wonder as I observed my fellow patrons, especially as we were filing out after the film was over and half of them already had their eyes glued to their cell phone displays, is that none of these people seem to realize that in the real world it is THEY who are the spoiled, easy living citizens of The Capitol, reveling in a seeming cornucopia of luxury in a world plagued by mass deprivation, and ironically distracted from reality by so called reality television shows.

In a Friday Rant I posted last June 17th entitled, "Unlike in the Movies, in Real Life Americans HATE the Underdog," I wrote:


...it’s in the international arena where America most behaves like the Evil Empire, to the cheers of domestic Star Wars fans everywhere. The empire’s legions roam the globe, dropping drone missiles on top of any goat herder’s wedding party in countries where the locals are unfortunate enough to be living on top of vital energy resources and actually have the audacity to insist that they should be allowed to live their lives free of American meddling. You’d think, given our alleged love for the small fry, Americans would be outraged at this injustice and demand that our military stop butchering civilians in our name, but you would of course be wrong. Instead we plaster yellow ribbons on the back of our cars, drape an American flag on anything that doesn’t move quickly enough and warble “Proud to Be an American” at top volume during every ball game.

I was at the time, of course, thinking about the Iraq and Afghanistan Wars. And now, here comes The Hunger Games, which could very easily be taken as a sharp commentary of how globalization and neoliberal economics, enforced at the point of a drone missile if need be, are designed to ensure that much of the the many Districts' (read: world's) resources continue to flow to the decadent Capitol (read: America). The Hungry are actually those billions of the world's poor living a subsistance-level existence in countries where the economy largely functions either to extract the raw materials or build the cheap consumer products so loved by those queued up in line to watch The Hunger Games.

Granted, the movie has been given such a slick Hollywood sheen that it is really difficult to take seriously as anything other than mere popcorn entertainment. Nevertheless, it just continues to amaze me how the American populace is collectively so lacking in self awareness that it cannot apparently even sense the inherent contradiction of always rooting for the cinematic equivalent of "terrorist insurgents" to overthrow the Evil Empire.


Bonus: "Lay down your money and you play your part...everybody's got a hungry heart"