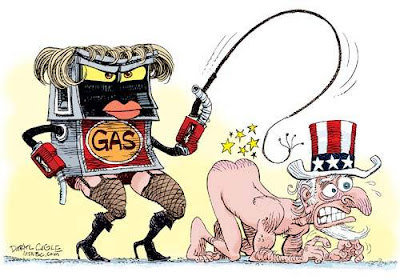 
Families canceling vacations. Fishermen watching their profits burn up along with their boats' gasoline. Drivers buying only a few gallons of gas at a time because they can't afford to fill the tank.

From all corners of the country, Americans are irritated these days by record-high fuel prices that have soared above $4 a gallon in some states and could top $5 by summer. And the cost is becoming a political issue just as the presidential campaign kicks into high gear.

Some blame President Barack Obama. Some just cite "the government," while others believe it's the work of big, greedy oil companies. No matter who is responsible, almost everyone seems to want the government to do something, even if people aren't sure what, exactly, it should or can do.

A Gallup poll this month found 85 percent of U.S. adults believe the president and Congress "should take immediate actions to try to control the rising price of gas." An Associated Press-GfK poll last month showed 71 percent believe gas prices are a "very" or "extremely" important matter.

Once again, we see how meaningless public opinion polls are in regards to energy issues. It may come as a shock to 85% of the American public, but there isn't fuck all the president and Congress can realistically DO to reduce gasoline prices. The COULD repeal the federal excise tax on gasoline, which would lower the price by a whopping 18.4 cents per gallon. State legislatures, which the president and Congress do not control, could also help out by repealing all state gasoline taxes, which vary by state but average around another 18 cents per gallon. And that is the grand total of what the government could do, lower the price of a gallon of gas by less than 10% in the short term.

But then, guess what? There goes all of that tax revenue governments at all levels are expecting will help pay to build and maintain roads and highways along with running public transportation. Let America go a year or so without any road or highway repairs, and let's see how quickly the entire transportation grid collapses.

But Spoiled Rotten Nation doesn't want to hear it:


"When I go out to change the prices, they honk their horns and yell at me," said Siroub whose station's cheapest grade of gas, regular unleaded, was selling for $4.44 a gallon earlier this week. "The other day one person even gave me the finger."

Boy, you gotta love the visual image of an enraged driver flipping the bird to a gas station manager because he is forced to raise his prices just to stay in business. What is that fucker going to be like when gas finally does rise to $5.00 or $6.00 a gallon or ever more? Worse yet, what will he be like when gasoline starts to become unavailable at any price? Something tells me he isn't going to handle it too well.

The last guy they interviewed for the article does make an accurate statement in the middle of his cluelessness:


Shrimpers in Louisiana and lobstermen in Maine complain that high fuel prices are cutting into their profits. Craig Rogers, who burns through 50 gallons of gas a day tending his lobster traps along Maine's rocky coast, blames commodities traders, though he questions whether politicians are doing enough. He said politicians are too well off to really grasp what ordinary people are going through.

No, Mr. Roberts, they don't understand what you are feeling. More importantly, they don't give a shit even if they may act like they do. But even if they did give a shit, there really is very little they can do. Yes, they've been lying to you about our energy predicament for 30 years, ever since Ronald Reagan defeated Jimmy Carter after the latter tried to tell the country the truth about peak oil. You and everyone else who is now whining about high gasoline prices didn't want to hear it then, and now you're all butt hurt about it.

As the saying from the old Fram oil filter commercial used to go: "You cay pay me now, or you can pay me later." Well, later has arrived and now reality has showed up at the door of Spoiled Rotten Nation waiving a huge bill in its hand, and it isn't going to go away until it gets satisfaction.


Bonus: How fitting is it that this commercial came out in 1981?