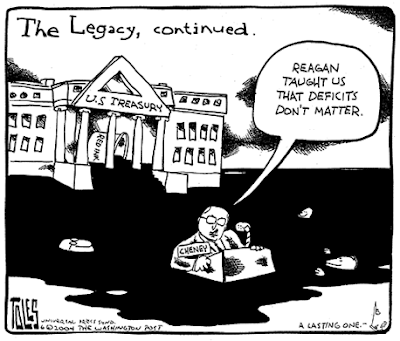 The ever irascible Zero Hedge breathlessly reported the news via an article from the Washington Times (a hideous wingnut propaganda rag I refuse to link to) this past week that the U.S. government’s monthly deficit for February hit an all time high, for any month, any year, EVAH. Here are the gruesome details:


The federal government posted its largest monthly deficit in history in February at $223 billion, according to preliminary numbers the Congressional Budget Office released Monday morning.

That figure tops last February’s record of $220.9 billion, and marks the 29th straight month the government has run in the red — a modern record. The last time the federal government posted even a monthly surplus was September 2008, just before the financial collapse.

First of all, I can’t help but point out just what an INCOMPETENT propaganda organ the Times really is. Note their reported figure of 29 straight months of federal deficits, and yet they also report that the government has not run a SURPLUS since September 2008. Taking off my shoes and socks to do the math for a moment, by my estimate that means February was actually the 41st straight month of monthly federal deficits. I guess no one at the Times owns one of those newfangled calculator thingies, or something.

Also, I would point out that the claim that February was “the worst month ever” is a little bit disingenuous. February is always a bad month for the deficit because of the way the cycle of tax collections versus payments plays out. Yet if the Leap Year (29 day) February 2012 deficit was only about $2 billion more than the total for the 28 days of February 2011, that means that the daily average of deficit was actually LESS this year, and last February retains its title as the worst month ever for federal deficit spending.

I nitpick on that point not to defend the obviously insane levels of federal deficit spending, but to point out the deliberate sensationalism being employed here, designed to get readers to think things are actually worse than they really are. The truth is bad enough, guys, so get a grip.

Returning to the headline I placed on this blog post, no, I’m not deliberately being trollish, and I’m not trying to say that there aren’t very legitimate concerns about the horrific state of the federal government’s finances. If you’ve been reading my blog for awhile, you are no doubt well aware of my opinion regarding the unsustainability of the government’s fiscal policies.

Nope, I wrote the headline from the perspective of people who aren’t anti-Obama insider partisans who read the Washington Times or extreme economic bears who read Zero Hedge—a percentage of the population likely in excess of 99% (hmmm…where have I heard THAT number before). The fact is that Former Vice President Dick “Darth Vader” Cheney was right when he said that “deficits don’t matter.” From a political perspective they really don’t because and the vast majority of the population DOES NOT CARE about the federal budget being out of balance, even grotesquely so.

What they do care about is that their fair share of the government’s largess—whether it be a Social Security check, Medicare coverage, an unemployment check, food stamps, a defense contract on which their job depends, a farm subsidy, a grant to build or repair the shitty highway near their home, money to keep the teachers at their local school from being laid off or any other government service you can name—keeps coming. Additionally, much as the denizens of Zero Hedge and hardcore Ron Paul supporters may hate the fact, they don’t care HOW the government comes up with the cash, just as long as they don’t have to pay higher taxes. This is the political reality that has led to record breaking deficits. In that regard, Obama is merely an obedient and faithful public servant.

This sad fact of the current American mindset is the very essence of what I call, Spoiled Rotten Nation. You can whine and moan and bitch about it all you want to, but it doesn’t change the fact that the government will continue to borrow money like there is no tomorrow in order to keep “extend and pretend” going for as long as possible. And what the heck, they might as well. Because as far as business as usual and our modern, suburban, cheap oil-enabled lifestyles are concerned, there really is no tomorrow.

Addendum: Reader Lord Black Eyes pointed out that the Zero Hedge reference to the Times article is confusing and they may have actually been quoting a Times piece from a year ago--meaning that the 29 month figure is correct. So maybe it is shame on Zero Hedge rather than shame on the Washington Times.

Addendum 2 (3/12/12): The actual deficit numbers for February have now been posted and were slightly worse than originally thought. Here is Zero Hedge again:


A few days ago we noted that based on preliminary data, the February budget deficit would hit $229 billion (yes, nearly one quarter of a trillion in one month, about where real Greek GDP is these days) - the largest single monthly deficit in history. Unfortunately, this number was low: the final February deficit was just released and the actual print is $231.7 billion.

And so yes, saying February 2012 was the worst month ever for the deficit is technically correct.
Posted by Bill Hicks at 8:04 AM