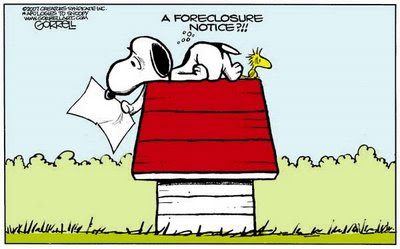 Here is a good companion piece to yesterday morning's post about America becoming a nation of renters, for it now looks like the resolution of the Robosigning paperwork scandal has kickstarted the foreclosure process nationally. Here is CNBC with the story:


Thousands of foreclosures that were stuck in process due to delays over the so-called "Robo-signing" paperwork scandal are working their way through a revamped banking system and heading toward final bank repossession.

Foreclosure starts surged 28 percent in January from December, according to a new report from Lender Processing Services. More than 230,000 loans began the foreclosure process in January.

But here is the really bad news:


Even more indicative of this new surge in processing is that repeat foreclosures hit an all-time high in January, representing 47 percent of all starts, according to LPS. Repeat foreclosures are either failed loan modifications, or loans that banks were attempting to modify but couldn't.

In other words, it does not appear that the many desperate efforts enacted during the height of the crisis to try and save homeowners from foreclosure had much of an effect. Of course, that isn't stopping President Hopey-Changey from trotting out yet another tired scheme to try and stave off the inevitable:


President Obama plans to kick off today's news conference with a pair of housing proposals designed to benefit veterans and homeowners seeking to refinance.

"This is part of the president's overall strategy to support responsible homeowners and the housing recovery," said a White House statement.

In one announcement, Obama plans to say he will enforce a recent agreement between the federal government and 49 state attorneys general to compensate military members and veterans who were unfairly foreclosed upon or denied lower interest rates on mortgages.

Obama is also set to announce rules that allow borrowers with mortgages insured by the Federal Housing Administration to refinance at lower rates. The administration says that will help homeowners save more than $1,000 a year.

And yet, all bad news is really good news to those who continue to snort the hopium:


"This large amount of foreclosures that have been sitting out there, with borrowers not making payments for an extended period of time, this may be coming to an end," says LPS' Herb Blecher. "This is what the market is looking for."

That's because while painful to housing in the short term, moving the huge pipeline of delinquent loans to their inevitable end will help the overall market in the long term. There are nearly 4 million loans now in some stage of delinquency which have not even entered the foreclosure process. Banks are modifying loans more aggressively now, but many of these mortgages simply cannot be saved, and the sooner they are processed and new buyers are found for the properties, the sooner overall home prices can recover.

"It's the resolution of the crisis. It started with a flood of new troubled loans, bottlenecks presented themselves as delinquent loans piled up. "The necessary resolution before we can get back to a healthy market is that that inventory goes away," says Blecher.

It never ceases to amaze me how just many clueless financial analysts there are out there getting paid big bucks to spew nonsense. It's a great racket if you can break into it.

Sorry to be the bearer of ill tidings, Mr. Blecher, but just clearing out the foreclosure backlog isn't going to do jack shit to initiate a recovery in the housing market. For the market to recover you need BUYERS. That means people with MONEY. In other words, people with GOOD PAYING JOBS with decent benefits, and the expectation that they have some actual job security and won't be sitting on the unemployment line again this time next year. So unless a jobs recovery takes hold in some other sector besides fast food workers and office temps, there is not going to be any housing recovery.

Is that really so hard to understand?


Bonus: Now it's not just the house, but the whole housing market that's burning down