The Greatest Day in South Carolina? 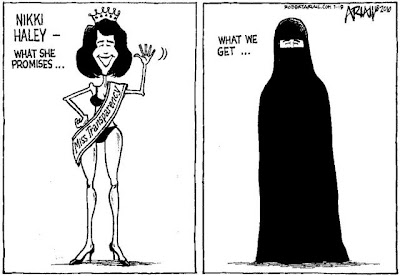 Last September 30th, I posted a Friday Rant entitled, "The Impotence of Positive Thinking," in which I blasted South Carolina's Tea Party Governor Nikki Haley for her asinine directive forcing beleaguered Palmetto State employees to answer the phone with the phrase, "It's a great day in South Carolina." Well, maybe soon that will really be true for every citizen of the state. Here is Palmetto Public Record with the details:


Two well-placed legal experts have independently told Palmetto Public Record they expect the U.S. Department of Justice to issue an indictment against South Carolina Gov. Nikki Haley on charges of tax fraud as early as this week.

A highly ranked federal official has also privately confirmed rumblings of an investigation and possible indictment of the governor, though the official was not aware of the specific timeframe.

Yesterday, Palmetto Public Record exclusively reported that the Internal Revenue Service has been investigating since March of 2011 the Sikh worship center run by Gov. Haley’s father. At least five lawsuits have been filed against the Sikh Society of South Carolina since 2010, alleging that the group bilked contractors out of nearly $130,000 for the construction of a new temple.

Gov. Haley is reported to have managed the temple’s finances as late as 2003, and our sources believe any indictment would center on what happened to the missing money.

You can bet that if Governor Haley is indicted, those state employees will be saying that stupid phrase as they answer the phone while trying to keep from laughing.
Posted by Bill Hicks at 7:59 PM