What's The Matter With Ohio? 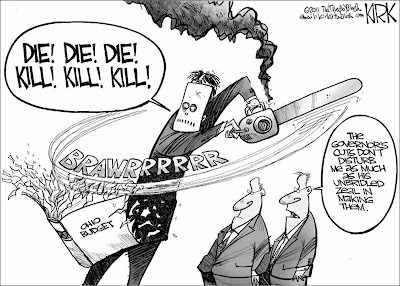 Several times here at TDS I've used the term, Spoiled Rotten Nation, to describe a country where an infantile electorate demands a high level of government services, but yet does not want to pay taxes to support those services. A couple of generations ago, the political divide on such issues was that the Democrats were the party of "tax and spend," while the Republicans generally favored fiscal restraint. Then Ronald Reagan came along and started selling the "Morning in America" snake oil of having your cake and eating it too. As a result, the Republicans became the party of "borrow and spend," and all fiscal restraint went right out the window. Yet Republican voters, who are every bit as addicted to government largess as are Democrats, still laughably see themselves as the party of fiscal restraint.

This dynamic can be seen very clearly in this recent Los Angeles Times story about the effects of budget "austerity" in the Great State of Ohio:


Ohio has been a battleground for budget issues. In 2010, it elected a Republican governor, John Kasich, who pledged to balance the state budget without raising taxes, an approach echoed by GOP presidential candidates circling the state before Tuesday's primary. In his budget, passed last summer, he eliminated the $8-billion deficit by slashing funding for local governments, among other things. In some towns, the new budget means a 25% reduction in state funding this year and a further 25% drop the year after.

"Think about this: In six months we eliminated an $8-billion budget shortfall without a tax increase," Kasich said in his state of the state address this year.

Around the state, police departments have laid off staff — in some cases, half of the officers. Police will no longer respond in person to theft calls if there are no witnesses, said Jay McDonald, head of the Fraternal Order of Police. About 166 school districts are projected to run deficits by 2014; many are scrambling to come up with cash by selling space for cellphone towers and charging students hundreds of dollars to participate in sports or extracurricular activities. The cuts came at the same time federal stimulus funding for schools ran out, dealing a double whammy for many communities.

Okay, a politician actually did what he pledged to do during the election campaign. So what exactly is the problem, other than the hardships it is causing?


In the western part of the state, a Republican stronghold where forgotten barns with peeling paint sit atop flat fields, many who supported Kasich say they didn't expect the cuts would reach their small hamlets. Uniopolis voted for Kasich by a margin of more than 2 to 1.

"I did vote for Kasich. He said he was going to balance the budget and he did," said Bob Wenning, whose wife, Elaine, has sat on the Uniopolis Village Council for 19 years. "But there's a lot of towns that are hurting because of those state budget cuts."

"He could have cut less than what he did," added Elaine Wenning, standing outside the couple's small house as big rigs rumbled by on a two-lane highway.

It's not surprising that voters supported the idea of balancing the budget in concept, but don't like the reality, said Bob Ward, director of fiscal studies at the Nelson A. Rockefeller Institute of Government in Albany, N.Y.

"People like the idea of cutting government, but not cutting services," he said.

Well, no shit. And here is an even better quote:


"These communities have existed for generations. To try to devastate them with funding that has been taken away is un-American and un-Ohioan," said J.K. Byar, the Republican mayor of Amberley Village, a town outside Cincinnati.

Actually, Mayor Byar, there is a word for people like you who believe it is the government's job to maintain the common good: "socialist."

What this story portrays is just what powder keg Spoiled Rotten Nation really is. Beyond just dreary old partisan politics, there is a profound lack of understanding why such austerity is unavoidable in this brave new era of permanent peak oil induced economic contraction. For instance:


Many blame the federal government for the budget problems, accusing it of spending money on bureaucracy and fancy dinners.

Of course, the budget cuts in this story are STATE government revenues, and and have nothing to do with the federal government. Additionally, every state receives huge amounts of money from the federal government every year for such things as highways and schools, without which the Ohio cuts would have undoubtedly been even deeper.

So what will happen as the real economy continues to deteriorate and government services get cut even further? It's pretty obvious from this story that the anger and frustration will continue to mount even among those who claim they support such cuts.


Addendum: Right after I initially wrote this post, a story appeared from Cincinnati.com indicating that Governor Kasich turned down federal disaster assistance to help with the cleanup from the recent tornado outbreak in The Buckeye State:


Ohio Gov. John Kasich said thanks but no thanks to immediate federal disaster relief Saturday, even as governors in Indiana and Kentucky welcomed the help.

Kasich did not rule out asking for assistance later, but his decision means tornado-ravaged towns in Ohio will not get federal aid now and are not eligible at this time for potentially millions of dollars in payments and loans.

The governor said Ohio can respond to the crisis without federal help and he would not ask federal authorities to declare the region a disaster area.

“I believe that we can handle this,” Kasich said while visiting a shelter for storm victims at New Richmond High School. “We’ll have down here all the assets of the state.”

Take comfort, Ohio. You got EXACTLY what you voted for. Not many people can actually say that these days.