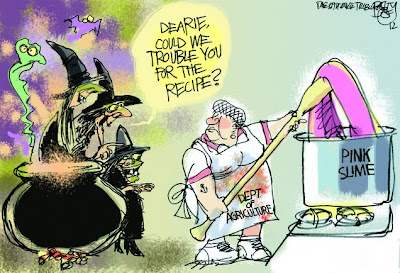 I'm posting this story for anyone who thinks that all I do is wallow in negativity on this blog. If you'll recall, back on March 7th I posted about the use of so-called "pink slime," a horrifically nasty beef based food product, in U.S. school lunches. Well, proving yet again that you can get away with pretty much anything until you involve the kiddies, the resulting public outcry from that story has effectively killed the industry. Here is the Raw Story with the details:

Beef Products Inc. spokesman Craig Letch told AP that only one factory in the country, located in Dakota Dunes, South Dakota, is still producing the stuff. Three others, in Texas, Iowa and Kansas, have reportedly been shut down.

The product, known as “lean, finely textured beef” to industry insiders, is comprised of connective tissue and other less-than-edible pieces of cows, which are mashed into a slimy, pink substance and treated with ammonia gas to kill off bacteria.

It is then added to ground beef as filler, to increase the product’s weight and, thereby, it’s price.

The goo was nicknamed “pink slime” by a U.S. Dept. of Agriculture (USDA) scientists who blew the whistle once regulators in the Bush Sr. administration began allowing it in the human food supply. It was previously only considered suitable for products like dog food.

A public outcry over its use began after the U.S. government was revealed to have purchased tons of the stuff for use in school lunches. Soon thereafter, USDA whistleblowers alleged that “pink slime” had become so prevalent that it existed in up to 70 percent of ground beef sold in the U.S.

Since the outcry began, several major fast food chains have said they would no longer use the meat filler in their food products, and the USDA has lifted rules that required schools to use it.

See, I can be positive on those rare occasions when good news happens. You're welcome.


Bonus: Speaking of Pink, "One of these days I'm going to cut you up into little pieces"