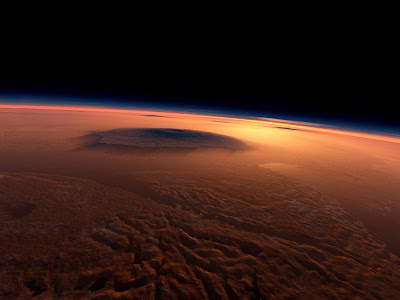 I've written here before that one of the most glaring examples of America's decline is the sorry condition of its space program. Even as the dreamers like Newt Gingrich keep imagining moon bases and manned Mars missions, budgetary realities are making it quite obvious that those are nothing more than pipe dreams. The New York Times confirms this sad state of affairs yet again with a story it published on Monday about how funds are now drying up even for continuation of unmanned space probes:


Just as NASA is on the cusp of answering the most fascinating questions about Mars — is there, was there or could there be life there? — the money needed to provide the answers is about to be abruptly withdrawn, a victim of President Obama’s budget request for 2013, scientists say.

Two ambitious missions that NASA had hoped to launch to Mars, in 2016 and 2018, will be canceled. The first would have sent an orbiter to measure gases in the Martian atmosphere — methane in particular, since methane does not last long. Its presence could suggest that Martian microbes are busy at work emitting the gas (though other explanations are also possible).

The second, in 2018, would have set the stage to fulfill the longstanding desire of scientists to bring pieces of Mars back to Earth for close-up study with the full arsenal of instruments available in their laboratories. Now the prospect of bringing Martian rocks to Earth is likely pushed to the mid- or late 2020s, all because of budget cuts.

“The pipeline is being shut off, and that’s not what anyone wants,” said Bill Nye, executive director of the Planetary Society, a nonprofit group founded by Carl Sagan and others who wanted to foster interest in outer space. “We are closer than anyone has ever been to discovering life on another world.”

President Obama’s budget request for 2013 calls for cutting NASA’s robotic exploration of the solar system by 20 percent, to $1.2 billion, and the Mars program would be particularly hard hit. Already, NASA has withdrawn from a collaboration with the European Space Agency that would have launched the missions in 2016 and 2018, angering the Europeans and disappointing astrobiologists and planetary scientists.

What amazes me when I read stories like this is that the authors always treat the idea of budget cuts in a vacuum and never mention that there is a very good reason why they are happening. The longer term trend here should be painfully obvious...as America's economic power slowly erodes away, its space program is collapsing. That basic fact was driven home even more directly by this passage:


The sidelining of the Mars program is one of several depressing developments at NASA. The space shuttles will never fly again, and the agency’s reliance on Russian rockets to ferry astronauts to the space station is likely to be extended, because financing of commercial companies to take over that task has been limited. The James Webb Space Telescope, meant as the successor to the Hubble Space Telescope, is delayed and over budget, now at least six years from being ready. The new heavy-lift rocket that is to take astronauts on faraway missions will not carry any astronauts until 2021. All of the big projects are slipping into the distant future.

Read: never. The trend could not be more clear, and yet the scientists remain completely oblivious to it:


In a letter sent March 5, a group of Mars scientists that provides feedback to NASA said it was “appalled” by the proposed budget cuts. “Among the many dire impacts, the cuts threaten the very existence of the Mars exploration program which has been one of the crown jewels of the agency’s planetary exploration,” wrote David J. Des Marais, a scientist at the NASA Ames Research Center in California and chairman of the group.

Sorry to break this to you, Mr. Des Marais, but it is not only the Mars exploration program which is seeing its very existence threatened but the entire space program itself. Sadly, its ultimate demise is merely a matter time. Given that this trend dates back to the demise of the Apollo Program, is it REALLY that difficult to see?

On June 22nd of last year, in my post, "Fittingly, Voyager 1 Leaves the Solar System as the Last Space Shuttle Gets Ready to Launch," I summed it up this way:


Someday, a hundred years from now perhaps, tales will be told to young children around the evening campfire of a fanciful time when human beings actually walked upon the face of the moon. Sadly, those stories will likely be treated by those youngsters with the same sense of wonder and yet innate disbelief as the legends of the Greek gods of mythology are today.

Bonus: "The universe is shaped exactly like the Earth...if you go straight long enough, you end up where you were"