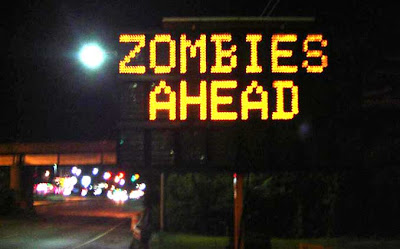 There is no truth to the rumor that falsely reporting a zombie outbreak is the real reason behind this story from Bloomberg:


BroadSign International Inc., a maker of software for operating digital signs, sought bankruptcy protection from creditors and said it intends to auction almost all its assets.

The company, based in Boise, Idaho, listed debt of $10 million to $50 million and assets of $1 million to $10 million in Chapter 11 documents filed today in U.S. Bankruptcy Court in Wilmington, Delaware. Two affiliates also sought court protection.

“The most effective way to maximize the value of their estates for the benefit of creditors is to complete a prompt sale of substantially all their assets,” BroadSign Chief Executive Officer Brian Dusho said in court documents.

BroadSign and its affiliates are insolvent and income is “insufficient to continue their operations without an infusion of further capital,” Dusho said. The company will seek court approval to borrow as much as $328,295 to help fund operations until it completes the sale.

The company’s software is used to manage digital advertising across formats such as billboards, kiosks and public transportation. BroadSign operates displays for airports, subway systems, highways or supermarkets in Canada, the U.K., Scandinavia, Spain and Singapore, according to its website and news releases.

Sounds like BroadSign is well on its way to being dead. We'll see if it remains buried.


Bonus: "All we want to do is eat your brains"