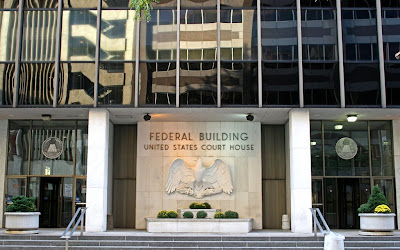 Let's be clear about something right up front. Despite the deficit reduction deal agreed to by our great and glorious "leaders" this past summer, the federal government has yet to meaningfully reduce its spending. The total number of cuts to date scarcely even represent a rounding error on the deficit, let alone the overall budget. Keep that in mind as you read the excerpt from this story that appeared last week in Newsmax:


The federal government is considering closing dozens of courtrooms across the country, many located in small, rural communities, as part of an effort to cut costs.

The Associated Press obtained documents showing that 60 federal court facilities in 29 states could be on the chopping block. Most of the courtrooms are in buildings that house other federal agencies including in post offices and many are located in remote areas. Critics say closing them could make it more difficult for people to get to court proceedings.

Six of the 60 court sites that could be closed are located in Arkansas. Texas and Georgia have five courts each on the list of possible closures. Officials are even considering shuttering the location where judges hold federal court in Alaska's capital city, Juneau.

There are 674 federal courthouses and facilities around the country, according to David Sellers, a federal courts spokesman. The 60 sites being considered for closure do not have a resident judge. Instead, judges based in larger cities travel to these smaller locations as needed.

As I said, this action is NOT the result of actual budget cutting:


"The federal judiciary is going through an aggressive cost containment effort because the money Congress has provided for the operating expenses for the courts has been essentially frozen the last three years," Sellers said in an email.

So what is going to happen when the federal government DOES finally have to start wielding the budgetary axe as the reality of our out-of-control deficit spending hits home? I don't think it really strains the imagination.