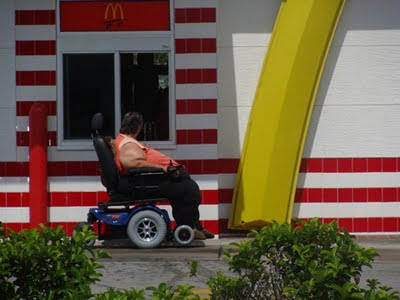 You can hardly leave the house these days without seeing someone riding around on one of those power wheelchairs. And if it seems like some of the people using them don't really need them and should be up and walking around, there might just be a very good reason for that. Here is the Tampa Bay Times with the story:


Whether covered by insurance or not, many Americans have power wheelchairs and scooters, as anyone visiting a supermarket or shopping mall can attest.

Now Medicare says it has been spending far too much on them, and Florida is one of the first states where the agency is cracking down.

In 2009, the most recent year for which figures were available, Medicare spent $723 million on power wheelchairs and scooters. And after a study, the agency estimated that at least 60 percent of claims were paid despite shoddy paperwork or were for devices that the recipient didn't need.

So just how bad is this form of Medicare fraud?


How much is Medicare losing? A review of power wheelchair claims for the first part of 2007 found that more than half of $189 million in claims were medically unnecessary or so poorly documented it was impossible to tell whether they were needed, resulting in $95 million in improper payments.

But beyond scammers trying to rip off there government, there is a larger problem here:


Dr. William Quillen, who directs the University of South Florida's school of physical therapy and rehabilitation science, agrees that some people really do need these devices.

"But there are also people you see at Target, Walmart or the mall (using power devices), and there doesn't appear to be any readily apparent medical need," he said.

But if you're capable of rehabilitation, the longer you spend in a power chair makes it more likely you'll never get out of it.

"They lose muscle strength and gain weight," said Kavita Jain, a therapy team leader at the Florida Hospital rehab unit. "We view it as equipment of last resort."

Etman said she thinks some doctors don't want to lose a patient by taking a tough stand, and so they sign the prescription.

"But they don't realize that it's hindering the patient, not helping them," she said.

"Our first line of response is, 'let's not get down that road until we complete your rehab,' " he said. "We're not going to throw in the towel."

Staying active is especially important for people with chronic conditions such as diabetes, heart disease and obesity.

"It's kind of move it or lose it," said Dr. Richard Morrison, a Tampa heart surgeon. "We want them up and moving. If they stop that . . . (their) cardiovascular system isn't going to be in good shape."

Etman said she sometimes gets patients who have used a power chair for years.

"They hate us," she laughed. "We're trying to get them to where they can use a walker or a cane, or nothing, and they don't want to."

I really cannot fathom the mentality of a person who would rather be helplessly confined to a wheelchair rather than have the freedom to get up and walk around on their own. A few years ago, I suffered a total ACL tear and could not walk without crutches for about a month after the knee operation. Being essentially confined to my couch for all that time drove me absolutely stir crazy. I couldn't wait to get the physical therapy started so I could start moving around without assistance again.

The bottom line with this story is that you have several of the very worst traits of modern America all intertwined: corporate greed on the part of the companies that sell the chairs, an unaccountable big government program carelessly throwing taxpayer money away, and patients who have been conditioned to be lazy and helpless while expecting someone else to pick up the tab for their bloated medical expenses. It's upon reading stories like this one that you begin to realize just how traumatic collapse is eventually going to be for a very large percentage of the population.


Bonus: For anyone who doesn't realize that this band actually recorded more songs than just "Stuck in the Middle With You"