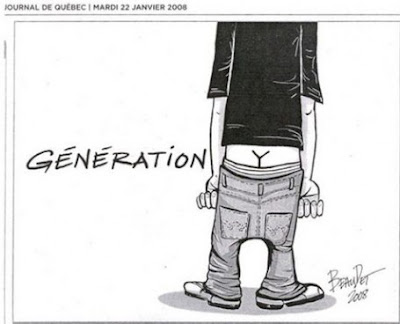 If you've been reading TDS for awhile, you know that I absolutely detest the glaring hypocrisy and self-regard of most of the mainstream media (gee, Bill, tell us something we don't know). The corporate controlled Fourth Estate in America long ago abdicated its duty as the watchdogs of representative democracy and instead became purring lap cats snuggling in the bossoms of the rich and powerful.

So it was with a very skeptical eye that I read this Washington Post story on how young adults have become less enviornmetally conscious than ever before:


They have a reputation for being environmentally minded do-gooders. But an academic analysis of surveys spanning more than 40 years has found that today’s young Americans are less interested in the environment and in conserving resources — and often less civic-minded overall — than their elders were when they were young.

The findings go against the widespread belief that environmental issues have hit home with today’s young adults, known as Millennials, who have grown up amid climate change discussion and the mantra “reduce, reuse, recycle.” The environment is often listed among top concerns of young voters.

“I was shocked,” said Jean Twenge, a psychology professor at San Diego State University who is one of the study’s authors. “We have the perception that we’re getting through to people. But at least compared to previous eras, we’re not.”

This study, published online this month in the Journal of Personality and Social Psychology, looked at the life goals, concern for others and civic orientation of three young generations — baby boomers, Generation X and Millennials.

Based on two long-standing national surveys of high school seniors and college freshmen, Twenge and her colleagues found a decline over the past four decades in young people’s trust in others, their interest in government and the time they said they spent thinking about social problems.

Steepest of all was a steady decline in concern about the environment and in taking personal action to save it.

Researchers found that, when surveyed decades ago, about a third of young baby boomers said it was important to become personally involved in programs to clean up the environment. In comparison, only about a quarter of young Generation X members — and 21 percent of Millennials — said the same.

Millennials also were the least likely to say they had made an effort to conserve electricity and fuel used to heat their homes.

It is important to note that most of the survey data available for Millennials were collected before the country’s most recent recession hit.

The article goes on with a bunch of blah, blah, blah from some befuddled college professors about this phenomenon, but I figured I could spare you that part. What the article did not do was point out what should be glaringly obvious: the media's own primary role in causing young adults to be relatively more callous than those of older generations.

In a way, these survey results perfectly mirror those of a public opinion poll I highlighted last July 4th in my post, "Independence Day Poll Shows a Shocking Collapse of America's Educational System" which showed that less than one-third of adults under 30 could even identify 1776 as the year America declared its independence...or less than HALF of the percentage of Baby Boomer age adults who could do so. At the time, I argued that the results represented a huge failure of our educational system, but upon reading the article above it strikes me that it isn't just a lack of basic knowledge, but an general attitude that disdains knowledge which is at work here.

There is plenty of blame to go around, of course, and certainly schools, politicians and parents are not without plenty of it. But I would argue that the media itself should take the most blame of all for this deplorable situation. Like it or not what the media, particularly television, chooses to emphasize or not emphasize is what a vast majority of Americans will thusly consider to be important or not important. And since the 1970s, the media has gradually turned its back on serious matters in favor of triviality, sensationalism and the celebrity worship.

I don't see how anyone could argue that it's an accident that, as the surveys cited here and in my previous post show, the level of caring about the environment and social programs, or even having a basic grasp of American History, has declined so precipitously and steadily from the Baby Boomers through Generation X to the Millennials. The Boomers came of age at a time in which social consciousness, and the media taking the lead in promoting that consciousness, was at an all time high. By the time this older Gen-Xer followed them in the late 1970s, many Americans had wearied of being concerned about social justice, but as I recall it was still very much a part of the national conversation. That became less and less true, until by the decade of President George Bush the Lesser when today's young adults were in their formative years, anyone who was concerned about the less fortunate, say innocent civilians in Iraq being killed and maimed in an unprovoked war of choice, was actually held in disdain by a large segment of the media establishment, and not JUST conservatives.

And it is not just the news readers, either. Think about the success of highly popular television series from the 1970s like All in the Family, MASH and the miniseries, Roots, all of which tackled sobering and uncomfortable issues, but were among the highest rated and most talked about shows on television at that time. What do we have today instead? Reality show garbage and a hundred American Idol ripoffs, which supposedly serious national media organs like the Atlantic Wire actually devote copious space covering as if they are actually of any importance whatsoever. You can also throw in the fact that hipster icons like The Daily Show and The Colbert Report subtly promote the message that geting angry or upset about the manifest injustices in our society isn't cool. Instead, it's better to just laugh along cynically with Jon and Stephen and then go back to your texting, tweeting and Facebooking.

Some might scoff and say that I am nothing more than just a crabby old fogey shouting for the young-uns to get off my lawn. To that I would reply that I don't actually blame so many young adults for having the attitudes that these surveys would seem to indicate that a majority of them have. It would be unreasonable to expect most of them to behave any differently than the way the have been conditioned by society to behave. It takes a very exceptional young person to swim outside the mainstream and risk being labelled an outsider.

Nope, if these surveys are at all accurate, and I have no reason to believe that they aren't, the real blame lies with all of us who allowed our society to become so astonishingly proud of its collective ignorance and lack of empathy. Our opinion leaders in the media very much helped steer us to where we are now, which is what makes it so galling that they should at all act surprised that we are now apparently seeing the emergence into adulthood of a generation of souls who simply don't give a shit.


Bonus: "Do you remember...your President Nixon?" Not bloody likely, David