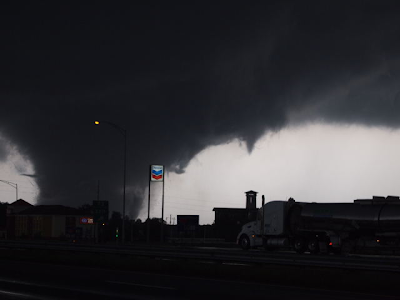 You would have to have been living under a very deeply buried rock not to notice that the weather in America has been increasingly volatile in recent years. The record breaking March tornado outbreak of last week drove that point home yet again. Unfortunately, it appears as though the agency charged with getting warnings out to the public of impending severe weather is about to take a hit to its budget. Here is a South Carolina television station with the details:


The National Weather Service is facing a different kind of storm.

It's not a hurricane or tornado, but instead a proposed budget cut of $39 million dollars. The government agency that issues daily forecasts, in addition to severe weather warnings, could have their budget cut by as much as four percent.

National Weather Service offices across the country, including the one in Charleston, have had to gradually cut back on travel over the last four or five years.

"It makes it difficult for conferences when we are trying to get technology and things going, but we cut back about 75 percent on travel, so we are pretty limited now in what we can do," said Frank Alsheimer, meteorologist at the National Weather Service.

"Fortunately, technology helps us in some respects in that with the use of things like webinars that we are producing over the Internet that we don't lose as much training as you would if we just took 75 percent off the top."

If the budget reduction is passed, Alsheimer said it's likely that there will be a delay in getting some new technology.

"One of the issues that will come up is the fact that these new technologies that we introduce help increase our lead times, help give the forecasters more tools to do a better and better service for the American people," said Alsheimer. "As these new technologies are delayed, it means we all have to wait for these improvements that we are expecting as years go by."

The budget cut proposal also includes cutting the number of information technology officers, across the country.

"Each forecast office has an ITO or information technology officer, which essentially helps us transition new data, new information to the forecasters to help make their decisions," said Alsheimer. "The thought is that a fair amount of that can be done remotely rather than on station. Whether that can be cleanly done remains to be seen."

Without an information technology officer at each office, he said there could be several issues.

The mission at the National Weather Service is to protect life and property; a mission that could be challenged if the $39 million dollar budget cut is approved.

Like so many other similar reports recently, the real story here is that this is just the beginning. Right now, the federal government is merely trimming the fat around the edges as it takes its first tentative steps to address its massive budget imbalance. Much deeper cuts will be coming in the future, and when that happens the National Weather Service will slowly lose its ability to warn about the development of severe weather even as the climate grows increasingly volatile. As Americans, we have a hard time imagining there ever being less available technology servicing any aspect of our lives, but those days are rapidly approaching nonetheless.


Bonus: "It's strange how hard it rains now"