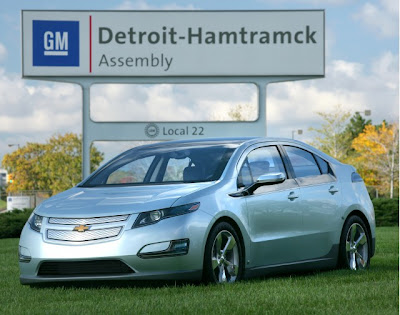 Lessee, according to Gas Buddy.com, the price of a gallon of the sweet stuff just topped $3.70 again, higher than it has ever been this early in the year. Gas prices have once again become a hot topic evidenced, as I pointed out the other day, by the number of mainstream news stories breathlessly warning of the impending possibility of $5.00-a-gallon gasoline by this summer.

Given all of that, you would think that newfangled electric cars like the Chevy Volt would be selling like hotcakes right now...and you would be precisely wrong. Not only are the cars not selling, GM is temporarily laying off the workers who build them. Here is USA Today with the details:


General Motors is stopping production of the Chevy Volt and European sibling Opel Ampera for five weeks due to slow sales.

"Even with sales up in February over January, we are still seeking to align our production with demand," said GM spokesman Chris Lee.

GM told the 1,300 employees building Volts at its Detroit Hamtramck plant that they will be laid off from March 19 to April 23.

So what exactly is the problem with this wonder vehicle that is supposed to solve all of our transportation-related energy problems?


The Volt is a technological "halo" car for GM, but also has been a political target. Critics have pointed to its $40,000 price tag and the federal subsidy of $7,500 plus state subsidies for people to buy one. They charge that the average buyer has a $170,000 household income and doesn't need to have a new-car purchase subsidized.

I realize that the conservatives have been dumping on the Volt in order to try and score political points with their troglodyte base, and I have no desire to help them in that cause. But liberal and progressives also need to stop drinking the hopium surrounding the Volt and electric cars in general. They are NOT "green," because they for the most part run on the coal that fuels many of our electrical power plants. And they won't save us from Peak Oil because there is no way we could possibly generate enough electricity to power 250,000,000 of them. The truth of the matter is that the age of the passenger automobile, which is an historical aberration that has lasted only a little over a century now, has at most another decade or two to run before being consigned to the dustbin of history.

But hey, at least they build the damn things in America. That's something, right?