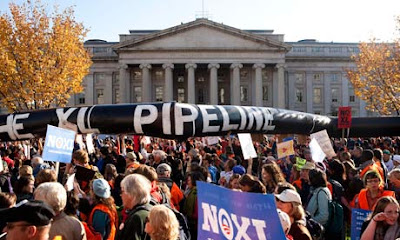 Last Friday, in the wake of President Hopey-Changey abruptly changing course on the Keystone Pipeline project, Rolling Stone political writer Jeff Goodell wrote a piece called, "Lessons from Obama's Keystone Cave-In," which was particularly notable because it demonstrated yet again that if you don't understand the dire implications of peak oil you are hardly going to learn the right lessons from any energy-related decision made by our so-called "leaders." Just for the heck of it, I thought I'd go through the four lessons listed by Goodell and offer a rebuttal for each of them:


1. "All of the above" = "Drill, Baby, Drill"
Obama talks a good game about developing "green" energy sources, but here he is, doubling down on oil. Although this speech was clearly political theater, I expected him to appease anti-pipeline activists by using his visit to Cushing – the belly of the fossil-fuel beast – to remind Big Oil that not only has he promised to yank away $4 billion in subsidies, but that oil is, as he said the other day, "the fuel of the past." Ha! Instead, Obama offered up a speech that would make Sarah Palin proud, reminding us how, over the last three years, "I’ve directed my administration to open up millions of acres for gas and oil exploration across 23 different states. We’re opening up more than 75 percent of our potential oil resources offshore." And he crowed: "We are drilling all over the place now." And as for pipelines, he bragged that "we’ve added enough new oil and gas pipelines to encircle the earth." Climate blogger Joe Romm rightly called the address "Obama's worst speech ever."

Okay, so Obama seemingly contradicted himself in two different speeches before two different audiences. That happens all the time with politicians. So which time do you suppose he was lying? The time he mouthed an empty platitude about oil being "the fuel of the past," or when he started bragging about his administration's pro-drilling record?

As the old saying goes, Money Talks and Bullshit Walks. In this case, the latter example was money while the former was the bullshit.


2. If Obama gets re-elected, the northern half of the Keystone pipeline is going to get built.
He did not say this explicitly in his speech yesterday, but the political code is perfectly clear. Obama is essentially endorsing tar sands oil production, with all the environmental wreckage it causes, as well as dooming the Midwest to more pipeline spills. It also means that investment dollars will now flow to boosting the production capacity of the tar sands operations, which in turn will pump up the industry's political clout even more. In effect, there’s no stopping the tar sands now. The dirty bitumen is gonna get dug up and refined and piped down to the Gulf and slimed across the world.

It should have been perfectly obvious even before Obama gave his speech that the whole damn pipeline was eventually going to be approved. All along, he was just trying to run the clock out until after the 2012 election and hoping there wasn't another spike in gasoline prices to force his hand before he was safe from ever facing the voters again. Well, the spike happened as you might have noticed, and Obama quickly realized there were more votes to be lost from being seen by Spoiled Rotten Nation to be standing in the way of America accessing another major source of oil (even if it will do nothing to bring down prices in the short term) than he will likely lose in support from environmentalists. Speaking of which:


3. Enviros have no muscle.
When the State Department last year decided to block the pipeline at least temporarily, enviros cheered. Frances Beinecke, president of the Natural Resources Defense Council, called it "a victory of truth over misinformation," and writer/activist Bill McKibben said "it isn’t just the right call, it’s the brave call." But that bravery wilted quickly in the face of high gas prices and Republican attacks, lame as they have been (the pipeline will have no measureable impact on gas prices in America today, tomorrow, or ever). The unmistakable subtext of this speech was: Tough shit, Frances and Bill and all your earnest followers. Are you really gonna vote for Romney in November?

Of course environmentalists won't be voting for Romney, and that is exactly why Obama was able to make the political calculation I outlined in my response to lesson 2. Yeah, a lot of environmentalists might stay home in November, or they might choose to throw away their votes by casting them for the Green Party, but they WON'T be voting for Romney and that will blunt any political effect their protest might have. Some of them will no doubt even cave in and vote for Hopey-Changey anyway, using the totally self-defeating lesser of two evils "logic."

The real lesson on this point ought to be obvious. The environmentalists, as well as those who believe in economic justice and those who are opposed to America's big business, war and empire foreign policy, DO NOT LIVE IN A DEMOCRACY. In a democracy you have real choices at the ballot box. As non-elite Americans living in a full blown corporatocracy, we most assuredly do not have any choice on issues of real importance that affect the economy or our future other than to throw our votes away on third party candidates who stand zero chance of ever being elected.


4. Obama is still wimping out on climate change.
Duh. But people had hopes. During the 2008 campaign, Obama talked about slowing the rising seas and putting a price on carbon pollution. After the election, he hired John Holdren as science advisor and Steven Chu to run to the Department of Energy, both of whom understand the dangers of climate change as well as anyone. Didn’t help. Today, despite the fact that global carbon pollution is accelerating and extreme weather is becoming the norm (it’s a sad but revealing irony that, as Brad Johnson points out, Cushing has been ground zero for climate disasters in the U.S.), Obama won’t even mention the words "climate" or "global warming," much less demonstrate any leadership on the single most dangerous threat that civilization has ever faced. Instead, he has shifted the conversation to energy independence. That may be a worthy goal, but if it’s pursued without regard to the risks of climate change, it will only increase the danger of future catastrophes.

Obama most certainly is "wimping out" on climate change. Why? Because he is a product of a system that is completely dependent upon never ending economic growth for its very survival, and curtailing the burning of fossil fuels would destroy that system pretty quickly. Obama would have to be politically suicidal NOT to wimp out on climate change, and the world only very rarely ever sees the likes of Mikhail Gorbachev achieving high political office.

Goodell then concludes his piece with this:


In any crass political calculation, drilling for oil will always win more votes than putting a price on carbon. But if I recall what I was taught in fifth-grade American government class, we elect presidents to do more than crass political calculations. Obama wants to be thought of as the president who freed us from foreign oil. But if he doesn’t show some political courage, he may well be remembered as the president who cooked the planet.

Excuse me for being so blunt, but what a childish statement. I don't know how old Mr. Goodell is, but the last president I can recall who didn't make every single decision based upon "crass political calculation" was Jimmy Carter, and we all know how well that worked out for him.

So many environmentalists just refuse to get it into their heads that humanity has painted itself into the tightest of corners. Beginning in earnest about a century ago, we tapped into the greatest energy resource nature could have possibly bestowed upon us. Instead of wisely managing that very nonrenewable resource, we exploited it as quickly as we could and allowed our population to expand in a very short time to well beyond what the planet can possibly sustain when that resource runs out, even if the resulting environmental damage from burning that resource wasn't also a hugely negative factor.

Not only America, but all of humanity is barreling towards the cliff at breakneck speed, and it is likely already too late to put on the breaks. "Leaders" like Obama have been put into place by his billionaire backers in order to pull the wool over the eyes of the masses and keep the game going for as long as possible. That is the real lesson to be learned from Obama's Keystone cave-in, and accepting it is the key to becoming part of the reality-based community.


Bonus: "I believe before the world ever got that bad, I'd be on my knees a-crying"