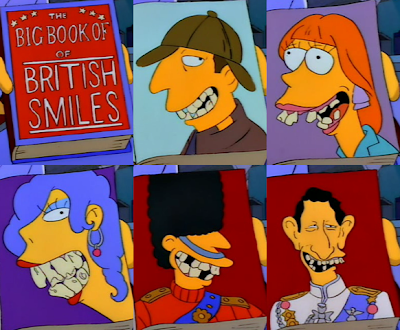 I know we have an awful lot of Anglophiles living in the U.S., but this is ridiculous. Here is the San Francisco Chronicle with the details:


Employer sponsored dental benefit enrollment declined by 5.7% in 2010, according to the National Association of Dental Plans. It's the first drop in dental enrollment since 1994, the year NADP began tracking enrollment. The Value Dental Plan, which hopes to capitalize on the decline in employer sponsored dental insurance, is not traditional insurance but rather a program providing significant discounts to its members with over 50,000 participating dentists across the US.

The "2010 Dental Benefits Enrollment Report," issued by NADP and Delta Dental Plans Association, revealed that only 166 million Americans (54%) were covered by some form of dental benefit through group or individual plans in 2009.

The 5.7% dip reflects about 10 million fewer Americans with dental coverage, compared to 2008 figures. Still, enrollment from 2006 through 2008 increased in line with U.S. population growth, remaining steady at 57%, according to the research.

"While total enrollment significantly declined in 2010, the number of employer groups offering dental benefits remained consistent, compared to the previous year. Based on data submitted for the report and other industry studies by LIMRA and NADP," says Evelyn F. Ireland, executive director of NADP. The recession and a stalled economy contributed, in part, to decreased enrollment. "The reduction in subscribers in some employer groups in 2010 most likely reflects family financial constraints and layoffs.

Dental insurance for many has never been all that great. My own health care plan, which is quite good otherwise, only covers a very small percentage of my dental care. On the flip side, there doesn't seem to have been nearly the explosion in dental costs like there has been for other areas of health care. I had a crown put in last year that probably only cost about 20% more than one I had put in 15 years ago. There's a lesson there somewhere.