AccuWeather's Excuse For A Horribly Blown Seasonal Forecast: The Tsunami Did It 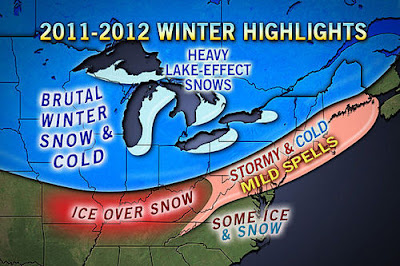 If Rick Santorum were to get his way, private company AccuWeather would no doubt replace the "socialist" National Weather Service as the nation's primary forecaster of weather. So what is the problem with a corporation doing on a for profit basis what the government already does for "free?" Just that you know damn well that a private company won't give predictions that its clients don't want to hear, such as telling an oil company that yes, Virginia, climate change is both real and manmade.

But the other problem is that corporations are always motivated to provide a service at the lowest possible cost, which mean the products they produce often suck balls. And AccuWeather just recently proved how badly it can actually suck balls. Here is the Chicago Tribune with the story:


A meteorologist for AccuWeather — the forecasting company that predicted a winter so bad, "people in Chicago are going to want to move" — has a theory for the recent Midwest heat wave: Japanese tsunami debris.

AccuWeather.com made headlines last fall, you may recall, with breathlessly apocalyptic predictions for the season ahead.

Five months later, winter 2011-12 is in the books as the ninth warmest on record, punctuated by a stretch of historically high temperatures over the last week, and the Chicago area remains remarkably populous.

"We're wrong sometimes; we can admit it," meteorologist and AccuWeather.com news director Henry Margusity said. "It was not exactly the best forecast."

Specifically, AccuWeather said we were in for a fifth consecutive winter with more than 50 inches of snow. In reality, just 19.8 inches of the white stuff has fallen, according to WGN chief meteorologist Tom Skilling, not only well below AccuWeather's prediction, but also 14.3 inches below the yearly average.

And of course, the company's excuse for blowing the forecast so badly is a real doozy:


Margusity was a good sport about AccuWeather's swing and miss, even offering up a retroactive long-shot theory for the warm winter and recent heat wave — the drifting debris field from last year's devastating Japanese tsunami seems to be sending warm air aloft above the Pacific Ocean, which could be contributing to warmer temperatures here, Margusity said.

"If you match up where that debris field is right now with where the warmer-than-normal water temperatures are, they match up perfectly," he said, also citing what proved to be a weakening La Nina pattern last fall and the lack of expected so-called Greenland blocking.

Oh sure, that makes perfect sense. Nope, it couldn't possibly have been the result of a rapidly changing climate...you know, the same factor that likely greatly contributed to Chicago experiencing nearly two full weeks of 80 degree temperatures this March. The same city which averages only one 80 degree March day EVERY 14 YEARS. Perish the thought. The tsunami did it. Must have been all of the radioactivity from the Fukushima accident that got dumped into the ocean that somehow warmed up the air or something.

Oh, and not to be a contrarian or anything, but you AccuWeather guys do know that the tsunami happened six months BEFORE you made that ridiculous forecast, right? So how come you didn't think of the "tsunami effect" at the time? Bit of an oversight, I'd say.

The good news is that the aforementioned Santorum, who in the past has received campaign contributions from AccuWeather's president, is seeing his presidential campaign slowly sinking beneath the waves (ha! a tsunami pun!). The bad news is, as I posted on March 16th, that the National Weather Service is already experiencing budget cuts that will no doubt hamper its effectiveness going forward. But hey, take comfort. AccuWeather is now predicting a "warmer than normal" summer, so maybe given the company's track record it won't be as bad as everybody is expecting after the unprecedented March heat wave.


Bonus: "Well, there's gonna be a snowstorm...and the teevee is going wild. They got nothing else to think of...and they're letting me go home"