The National Football League Is A Nonprofit Organization 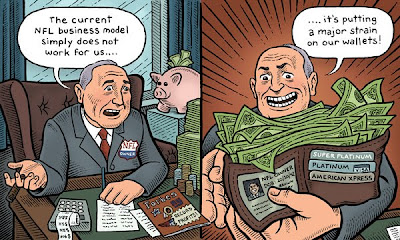 Only in America, where the public is completely asleep at the switch, could a collective of filthy rich billionaires who run sports franchises receive tax exempt status for their operations. Here is Business Insider with the dirty details:


You may not know it, but the National Football League is a nonprofit organization. It may seem absurd that a collection of teams that generated at least $9 billion in revenue last season would be given tax-exempt status, but the NFL is technically classified as a 501(c)6 organization.

The article then goes on to describe just how absurd this is:


It seems inconceivable that the NFL is not “engag[ing] in a regular business of a kind ordinarily carried on for profit.” How are their efforts to maximize profits any different than those of Major League Baseball, the National Basketball Association or the National Hockey League? As far as the NFL’s “net earnings,” the nonprofit was actually in the red in 2009, according to its latest available return. Virtually all of the leagues $192.3 million in revenue in 2009 came from “membership dues & assessment.” While the NFL doesn’t explain how much each clubs pays in dues, it averages to about $6 million per team. NFL owners don’t have to pay taxes on those dues, as they are considered donations to a nonprofit. Meanwhile, the NFL had $234.6 million in expenses in 2009, but the “nonprofit” paid $53.6 million to 8 individuals. NFL Commissioner Roger Goodell earned $9.9 million in 2009 (and will earn $20 million by 2019) but he wasn’t even the highest paid individual. NFL Network President Steve Bornstein was paid $12.6 million by the “nonprofit” even though NFL Network is part of NFL Enterprises, LLC. In other words, the only reason the NFL is operating in the red is because of the massive salaries it’s paying its key executives.

It seems even more inconceivable that a country that has been running trillion dollar plus budget deficits for the past four years didn't close this particular tax collection loophole a LONG time ago. But that's America: land of the billionaires, by the billionaires and for the billionaires. And the rest of us sit back, drinking shitty beer, eating crap food and mindlessly cheering on their tax exempt league, and caring more about where Peyton Manning is going to play quarterback next year than we do about how these same billionaires and others like them are ruthlessly destroying America's prosperity while they laugh all the way to bank.


Bonus: "I'm amazed at the TV stations...I'm amazed what they want me to believe"