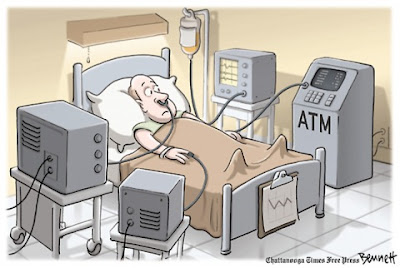 I've asserted here before on TDS that you really don't have to be an Ivy league educated intellectual to be able to spot all of the ominous trends in our society. Sometimes all it takes is a basic math skills and a little common sense. Last September 29th, I wrote a post called, "Cost of Family Health Care Coverage Doubled in the Past Decade," in which I cited a news story about rapidly rising health insurance premiums. Taking the figures from the story, I did a little math and made the following calculation:


Keep in mind that the median household income in America is somewhere around $49,000. So that means it costs nearly a third of a family's annual income to provide that family with adequate medical coverage. And the cost just continues to rapidly spike upwards despite the corporate giveaway known as Obamacare.

By my back-of-the-envelope calculation, at the same 9% rate of annual increase in health insurance costs seen during this past year, the total cost of the insurance would more than double again by the year 2020, to just over $32,000. Given that incomes remain stagnant, and are at best likely to continue to be so as the Great Recession drags on, that means the cost of a family's health insurance would then consume nearly two-thirds of their annual income before taxes.

A scary prediction, right? Well, now comes the confirmation that I wasn't all that far off in my assertions. As reported by the Raw Story, the Annals of Family Medice just published a report on this very same topic, and the statistics are grim:


The cost of health care will surpass the price of a median income household in the United States by 2033 if current trends continue, according to a study published in the March/April issue of Annals of Family Medicine.

Researchers accumulated data from the U.S. Census Bureau and the Medical Expenditure Panel Survey to compare Americans’ incomes and the premiums they’ve paid from 2000 to 2009. The cost of premiums rose by eight percent over that time period compared to just two percent of incomes.

If those trends continue, the average cost of a family premium will be half the income of a median household family, which was $49,800 in 2009, in 2021. Premium costs would exceed the median family’s income by 2033 if trends remain unchanged.

Once again, I take no satisfaction in being right when the implications are so dire. In my original blog post, I wrote the following in conclusion:


When a trend appears to be unsustainable, you can bet darn well that it is. At this staggering rate of increased costs, the American medical system is headed for collapse, and not in the distant future either. Unless something dramatically changes, I don't see how the system as currently constituted survives even the current decade.

Bonus: "I know the whiskey won't soothe my soul...and the morphine won't heal my heart"