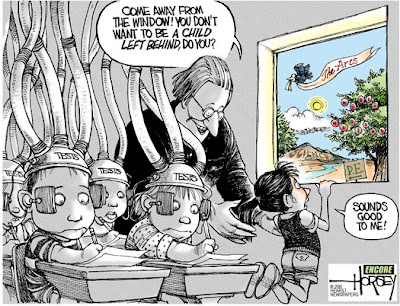 I've written here before that I always find it amusing when some individual who remains comfortably asleep in their Matrix pod has a brief moment of lucidity in which truth about a certain aspect of the system which enslaves them is revealed. If only they would grasp ahold of that one revelation and start asking larger questions, they might just wake up and start to realize the truth. Sadly, they never do.

That's a long winded introduction to an op-ed piece by a woman named Wendy Lecker that appeared last Friday in the Stamford Advocate, protesting the expanded use of standardized testing nationwide. Lecker starts off well enough:


Amid all the talk of the proposed teacher evaluation system, one major effect is not being discussed -- the exponential increase in standardized tests that these evaluations demand.

Is this the direction in which we, parents, want our schools to go? With the standardized tests we have now, our children's education is being narrowed. All over this state, art, music, social studies and foreign language courses are being squeezed out to prep for CMTs and CAPTs.
Not only is our curriculum being narrowed, but so is the way our children learn. They are being trained how to give canned answers to prepackaged questions, rather than learning how to think for themselves. Both teachers and students are increasingly suffering through mind-numbing scripted lessons.

Students, especially those in the neediest districts, are being denied the opportunity for a rich and varied education because of the pressure put upon districts to increase test scores in just a few subjects. Imagine what will happen when high-stakes tests are implemented in every subject. Instead of a piece of clay or a paintbrush, a 6-year-old will now be handed a worksheet. Far-fetched? It is already happening in Colorado.

This is not what I want for my children.

Lecker then goes on to ask the key question:


It makes me wonder what policy makers want from public schools. Part of the push for more tests stems from the new Common Core Standards -- touted as the answer to our achievement failures. Yet countries with national standards fare no better in educational achievement than those without. Every state has consistent standards, but achievement varies widely. And the Common Core Standards themselves have been found to be in the "mediocre" range when compared to existing state standards across the country.

To her credit, Lecker actually comes up with a good answer to her own question:


If new standards will do nothing to improve learning, why were they pushed so aggressively? The comments of Joanne Weiss, chief of staff to U.S. Secretary of Education Arne Duncan, are telling. She wrote in the Harvard Business Review that the Common Core "radically alters the market ... Previously, these markets operated on a state-by-state basis, and often on a district-by-district basis. But the adoption of common standards and shared assessments means that education entrepreneurs will enjoy national markets where the best products can be taken to scale."

Our children as a market for the testing and textbook industry.

Actually, I'm being a bit facetious. Unfortunately, Ms. Lecker didn't actually win anything. Having correctly identified that major motivation behind the standardized testing scam, she then proceeds to lose her nerve and become all mealy-mouthed:


Education is the key to good citizenship. The skills needed to be a responsible citizen are not those measured from a writing prompt or scantron. Students must be able to do things like analyze events in history and their impact today, discern the connections between disease and health policy, and collaborate with each other and their teachers.

Good citizenship is sorely needed in our nation today.

In 2008, the U.S. began its slide in the "competitiveness" index of the World Economic Forum, from No. 1 to its current No. 5 position. Not surprisingly, the WEF attributed this decline not to how eighth-graders did in math, but rather to our macroeconomic policies, and to the political intransigence that is preventing change.

Similarly, the officials rebuked by Connecticut's Supreme Court last week for illegally taking over Bridgeport's Board of Education had superior language skills, contending that the law requiring training of board members did not really mean "require." Their failure was in placing politics above the public good.

How can we ensure that the next generation can fix the problems we are leaving them? Our children need to be exposed to a wide variety of subjects, writing, teaching styles and personalities in order to make their own way in school and in life. Students and teachers in Connecticut have so many different life experiences and perspectives. This diversity is the key to tolerance and to innovation. However, if we insist on homogenizing our children's thinking, preparing them only for success on tests, we will indeed maintain the status quo that is stifling the progress of our society.

No doubt, Ms. Lecker. But what exactly do you plan to DO about it other than to just write a crabby op-ed article? Yes, the corporations and their profit motives now control every aspect of your child's education, from the "Pink Slime" being served in the school cafeterias, to the standardized textbooks in the classrooms, to the advertising being placed plastered on school facilities by school districts desperate to raise revenues. And you know what? That is EXACTLY the way the policy makers, whose campaign contributions come from those very same corporations, want it.

If you don't want your children exposed to all that you really have only one choice: homeschool 'em. I know homeschooling gets a bad rap because a lot of fundamentalists do it, but I have a relative who a decade ago became disgusted with the teaching of standardized test material in her local school system and did exactly that. And her three children, all of whom are reaching college age now, are doing quite well, thank you.

Because you see, Ms. Lecker, you can bitch and moan about our corporatized education system all you want. It isn't going to do you any good. Your choice is very simple, put up with it or drop out of it. Because as long as there are big bucks to be made off of it by those who really run things, there is no way your are going to reform the completely rotten edifice from within.


Bonus: At the risk of this clip being overused by the reality based community, it really is worth watching repeatedly just to keep reminding yourself of the real truth