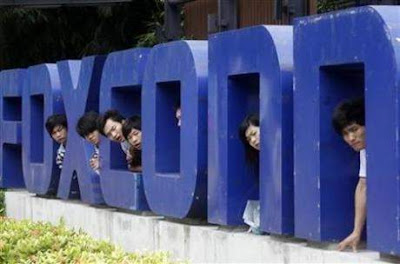 By now, the reported conditions at Foxconn, the Chinese manufacturer of Apple products, has become a worldwide story and an embarrassment to everyone involved. Not that it has at all slowed down the purchasing of iCrap or anything, but at least it has served to call attention to the appalling conditions workers in other countries are required to endure in order to make the cheap goods American mindless consumer zombies so crave.

Making all of that stuff is just half the battle, of course. It also has to be shipped and then delivered to the customer. Increasingly, the purchases of the products has been made online, which means traditional "brick-and-mortar" stores are slowly being replaced by giant online retail warehouses. Mother Jones human rights reporter Mac Mclelland recently went undercover to work for one of these warehouse behemoths, and what she found were working conditions not much better than those at Foxconn. The resulting article, enchantingly titled, "I Was a Warehouse Wage Slave," is well worth reading in its entirety.

Helpfully, The Atlantic Wire boiled down McClelland's story point-by-point to compare her experience with the reported conditions at Foxconn:

America: The standard shift is 8 hours, but "working more than eight hours is mandatory," explains McClelland, who ends up working 12 hour days during peak season. During that day she gets two fifteen minute breaks, as well as a 29 minute and 59 second lunch break. McClelland often took these precious seconds for anxiety filled pee breaks, she explains.

We lose more time if we want to pee—and I do want to pee, and when amid the panic about the time constraints it occurs to me that I don't have my period I toss a fist victoriously into the air—between the actual peeing and the waiting in line to pee in the nearest one of the two bathrooms, which has eight stalls in the ladies' and I'm not sure how many in the men's and serves thousands of people a day.

China: After the most recent raise, our Foxconn workers get $285 per month, which comes out to about $10 per day.

America: Though she got hired at "elevensomething dollars an hour" McClelland says she will make $60 in her 10.5 hour day, which comes out to about $5.71 an hour. That's about $1.50 dollars less than both the Federal and Mississippi minimum wages. Her plight isn't unique either, according to this stat she dug up: "The Bureau of Labor Statistics found that more than 15 percent of pickers, packers, movers, and unloaders are temps. They make $3 less an hour on average than permanent workers," she writes.

China: One Chinese worker told CNN that turnover at the factory is high due to dissatisfaction and that those who speak out are dismissed.

America: Criers get sacked. "Well, what if I do start crying?" McClelland asked a seasoned worker. "Are they really going to fire me for that?" "Yes," she says. "There's 16 other people who want your job. Why would they keep a person who gets emotional, especially in this economy?" And those who manage to perform don't have much of a chance of promotion, workers stay temporary for years.

China: After months on the line, even young workers complain of permanent physical damage.

America: Here's what McClelland learned during training: "People lose fingers. Or parts of fingers. And about once a year, they tell us, someone in an Amalgamated warehouse gets caught by the hair, and when a conveyor belt catches you by the hair, it doesn't just take your hair with it. It rips out a piece of scalp as well."

China: The mind-numbing labor has led to mass suicides, encouraging Foxconn to implement a counseling center for troubled workers.

America: "Is somebody going to be mean to me or something?" McClelland asked a woman at the local chamber of commerce. "Oh, yeah," the woman responded.

China: The Fair Labor Association called the plant pristine, much better than other factories in China. Yet, the work entails 12 hours of the same action, over and over. The job is solitary and silent, besides the machinery.

America: Less dull than Foxconn labor; more physically exhausting. "I have been hired as a picker, which means my job is to find, scan, place in a plastic tote, and send away via conveyor whatever item within the multiple stories of this several-hundred-thousand-square-foot warehouse my scanner tells me to," explains McClelland.

Justification for the Job

China: Many flock to these jobs because it's better than the options elsewhere. Some argue that this type of work has improved the entire country's quality of life.

America: The American job market isn't great, people will take what they can get. "'How's the job market?' a supervisor says, laughing, as several of us newbies run by. 'Just kidding!' Ha ha! 'I know why you guys are here. That's why I'm here, too!'"

I haven't seen figures to back this up, but I would gather that these kinds of warehouses have been among the biggest "job creators" in America during our great and glorious jobs recovery of these past two years. Reading McClelland's eye opening article, and recognizing that the low paid worker drones represent the new normal in our economy, how can anyone expect consumer spending, the supposed backbone of the economy, to return to where it was before the Great Recession began?

Is this the future of work in America? I'll let McClelland tell you herself:


"This really doesn't have to be this awful," I shake my head over Skype. But it is. And this job is just about the only game in town, like it is in lots of towns, and eventually will be in more towns, with US internet retail sales projected to grow 10 percent every year to $279 billion in 2015 and with Amazon, the largest of the online retailers, seeing revenues rise 30 to 40 percent year after year and already having 69 giant warehouses, 17 of which came online in 2011 alone. So butch up, Sally.

This is the logical endgame for the globalist consumer economic model--the hideous big box stores giving way to massive online retail warehouses staffed by wage slaves little better off than their counterparts in China who make the products. Looked at from this perspective, we should be thankful that the end of the cheap oil era is going to destroy globalization as it becomes too expensive to ship cheaply made products everywhere on the planet. As peak oil author Jeff Rubin says, your world is about to become a whole lot smaller, and this is exactly why you should embrace that idea.


Bonus: I'd like to dedicate this song to Mother Jones human rights reporter Mac McClelland for a job very well done