The Beast: Prosecuting Rush Limbaugh Is A Really Bad Idea 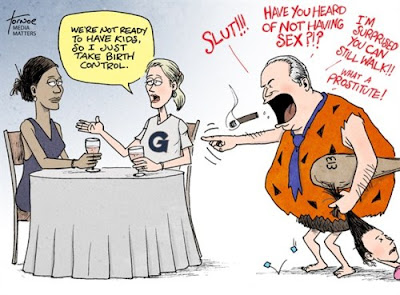 I haven't had much to say about the whole Rush Limbaugh "slutgate" controversy, mostly because I consider it to be yet another tiresome media distraction. My opinion on the matter is really pretty simple:


1). Is Rush Limbaugh a sexist pig and a festering boil upon the ass of the American body politic?

2). Do those who are outraged by his comments have the right to demand that companies pull all of their advertisements from his hideous radio show?

3). Does Sandra Fluke have the right to sue fat ass Limbaugh for defamation?

Of course--I hope she does, in fact.

4). Should Rush Limbaugh be prosecuted criminally for what he said?

Are you fucking kidding me?

Kudos to outlaw journalist Ian Murphy of The Beast for recognizing just what a stupendously bad idea point number four really is:


Just when you think the “professional left” got a hold of something they couldn’t possibly fuck up — that is, Rush Limbaugh doing, saying, imparting, intimating anything whatsoever — they do. Hard.

While this is not the case, overall, notorious “feminist” lawyer Gloria Allred has decided to do something incredibly stupid. She’s trying to get Rush Limbaugh prosecuted under an arcane Florida statute for calling Georgetown University law student Sandra Fluke a “slut” and a “prostitute.”

Apparently, Section 836.04 of the Florida Statutes reads that anyone who “speaks of and concerning any woman, married or unmarried, falsely and maliciously imputing to her a want of chastity” is guilty of a first degree misdemeanor. This is an antiquated, and astonishingly foolish, law which flies in the face of the very notion of freedom of speech.

Now, if Fluke wants to pursue a civil case against Limbaugh for impugning her character in the public sphere then that’s fine. She may even have a decent case to make. But offensive words should not be a crime. And if Allred thought about this for even a second, she’d have realized that subjecting people to criminal prosecution for using unpopular or “vulgar” speech is not in the interests of women — or anyone.

I mean, holy crap, it ought to go without saying that not only should Limbaugh not be prosecuted, that awful Florida law should be taken off the books ASAP. Sorry folks, I don't care how much you may disagree with what a person has to say, they should never, ever be made a criminal just for saying it. Down that road lies totalitarianism, and anyone who does not automatically recognize that fact has no business calling themselves a liberal or progressive.