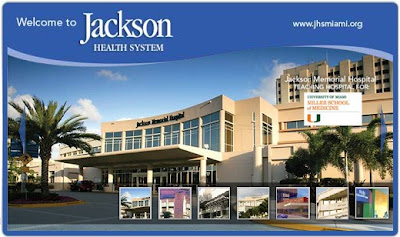 This is one of the more infuriating layoff stories I've read in awhile. Here is NBC Miami with the appalling details:


Jackson Health System’s CEO announced Tuesday that his organization is laying off 920 staffers and eliminating another 195 vacant positions to give the organization the “rock-solid foundation” it needs as he right-sizes it.

Carlos Migoya said Jackson will also create about 350 new part-time jobs so it still maintains “the proper staffing levels to provide excellent medical care and customer service for our patients.”

In all the moves will save Jackson about $69 million per year, including about $55 million in benefits, Migoya estimated.

So you wanna hear the punchline? It's a doozy:


The president of SEIU Local 1991, Martha Baker, slammed Migoya for the "massive layoffs" in a statement Tuesday evening.

"This is what you get when you hire a billionaire banker and then cut him loose to take a chainsaw to healthcare in Miami-Dade County," said Baker, who is a registered nurse. "It’s unbelievable that he wouldn’t consult the nurses, doctors and healthcare professionals – who have sacrificed out of their pockets to keep Jackson afloat – about how his plan to ‘right-size’ the system might harm patient care. We have no idea how Mr. Migoya thinks patient care can be maintained with such drastic cuts to frontline caregivers."

Migoya said in a letter to members of Jackson’s Financial Recovery Board Tuesday that Jackson will have cut spending by a total of about $91 million per year, counting the new reductions and other “staffing initiatives” rolled out since last June.

“These actions will be painful for many people, including those whose positions are eliminated and those who will be working even harder to care for this great system and its patients,” Migoya wrote. “We are making every attempt to be sensitive to the emotional nature of these changes, including the continued availability of our employee assistance program and offering transition support services for impacted employees.”

He expressed his confidence “that Jackson will emerge as a stronger and more nimble organization that is better positioned to reach its strategic goals.”

Yep--I too would really like to know what qualifies a billionaire banker to be the CEO of a hospital system. Seems like a recipe for disaster to me. I also wish the article had mentioned how much Jackson Health System CEO Carlos Migoya's compensation package is worth. Because if he's getting paid tens of millions of dollars like some other health care CEOs are and then laying off staff to save a similar amount, this story becomes even more outrageous.


Bonus: Everybody knows the fight was fixed...the poor stay poor, the rich get rich