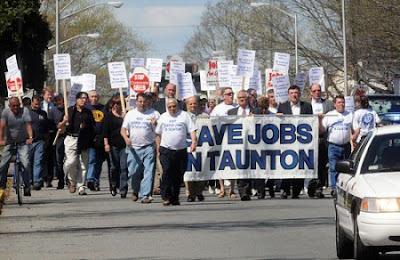 In putting together the posts for this blog, I have to read a lot of depressing stories. It kind of goes with the territory. As depressing as reports of factories closing, or college students being saddled with unpayable debts or retiree pensions getting slashed may be, the most depressing stories are those in which desperate people are given false hope by some business-as-usual scheme that is destined to fail. Here is the Boston Globe with one such story:


Tom Hoye called a casino resort a one-time chance for this struggling city. Mashpee Wampanoag chairman Cedric Cromwell lavished praise on Taunton’s movers and shakers. And many residents here, accustomed to decline, predicted that a gambling emporium would revive a city that lost its luster long ago.

That buzz of good feeling enveloped the interim City Hall yesterday, as Hoye and Cromwell announced the beginning of a complex process to build a destination casino costing at least $500 million near the heavily traveled intersection of Routes 24 and 140.

“This proposal has the potential to create thousands of employment opportunities for our residents,’’ Hoye said to applause and Native American whoops. “This could potentially be the shot in the arm that our city needs to once again be the gem of Southeastern Massachusetts.’’

The officials stressed that their announcement was merely a beginning and that many hurdles must be cleared before a casino could be built by the Mashpee Wampanoag on a 77-acre, privately owned site in the Liberty and Union Industrial Park.

But yesterday, none of the legal minutiae and mazelike complications seemed to matter to many residents. They spoke of jobs, first-class entertainment, even access to gambling as benefits for a city that has hemorrhaged the mill and precious-metal jobs that once inspired its nickname of Silver City.

“Walk down the streets here and see everybody that’s out of work’’ said Jim Gillon, 59, as he sat at the counter at Joe’s Diner. “It’ll bring jobs to the city. A casino’s got to go somewhere, right? I’ve seen all the silver places and factories go out of business. It’s time to bring some jobs back.’’

Joe Resendes, a 57-year-old landscaper, gave his thumbs-up during a stop at City Hall.

“Taunton needs a kick,’’ Resendes said. “Taunton may be on its last breath. Let it have some air. I’m all for it.’’

The Mashpee Wampanoag hailed the potential for doing business here.

“I have goosebumps, and that’s a good feeling,’’ Cromwell said. “It’s good medicine.’’

“I’m excited about the opportunity for prosperity for our people,’’ said tribal secretary Marie Stone.

Could that set of quotes be any more pathetic and sad? Legalized gambling is already in big trouble in places like Las Vegas and Atlantic City because so many of the players suckers are tapped out, but these people do not seem to have noticed. Worse still is the idea that it is at all desirable to try to rebuild a local economy decimated by globalization by centering it around a predatory industry that often preys on those who can least afford to lose their money.

There was a time in America, not much longer than a generation ago in fact, when legalized gambling faced a steep uphill battle all across the country because of the moral objections and concerns about the ethics of raising revenue on the backs of the vulnerable. But now the desperation out there has grown to the point where a whole community now embraces the idea without hesitation despite the mounting evidence that, moral and ethical questions aside, it no longer works as a form of economic stimulus.


Bonus: Doug Stanhope has a different take on the lost factory jobs