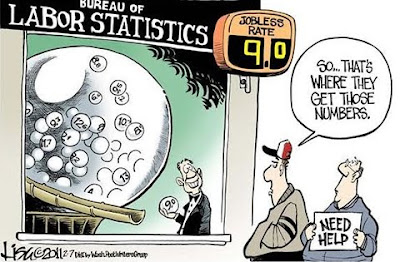 Many of us in the reality based community continually shake our heads at the bald faced lies about the economy being repeated in the media every single day. We often wonder to ourselves how can people continue to believe such nonsense. But here's the thing about propaganda: it works. It works so well in fact, that it even deceives those are responsible for helping to promote it. Case in point is this almost surreal story that appeared on Friday on CNN Money, which starts out with this tag line:


Economists are scratching their heads over the recent failure of a textbook economic law: In order for the unemployment rate to be where it is today, our economy should be growing faster than it is.

"The unemployment rate...where it is today?" You mean, as this chart from Calculated Risk shows, where there are 4% fewer jobs in America than there were at the end of 2007 despite millions of people being added to the overall population since then? Oh boy, this ought to be good.


Lately the improving jobs picture has stumped many Wall Street economists, who say the labor market seems to be doing better than what the pace of economic growth would suggest.

Goldman Sachs (GS) and a few other Wall Street firms forecast real GDP growth of less than 2% this quarter. And yet, the unemployment rate in January dropped to 8.3% – the lowest level in three years. The decline goes against Okun's Law, which economists have historically relied on to forecast what the job market might look like given how quickly (or slowly) the economy is growing. As a rule of thumb, Okun holds that year-on-year economic growth of 2 percentage points above the trend -- widely considered 2.5% -- is needed to lower unemployment by one point. And vice versa.
Since the Great Recession, the unemployment rate has defied the law.

James Pethokoukis of the American Enterprise Institute, a Washington DC-based think tank, has laid out three instances: In 2009, the unemployment rate edged to 10% following a 3.5% drop in GDP. But under Okun, unemployment should have risen higher to 10.4%.

All this has made many wonder if the economy is doing better than what the data currently shows or if unemployment seems artificially low.

Someone needs to tell John Williams of Shadow Stats that he really ought to give up on trying to report the real economic statistics as the government used to report them back before it became politically expedient to lie. Because clearly, nobody is paying attention, even those whose fucking jobs it is to study the real state of the economy.

The article goes on and at one point does at least touch upon the real issue:


It could be that today's GDP statistics are wrong. The economy might actually be growing much faster than we think, which wouldn't be too surprising since it's not unusual for growth statistics to get revised years later as economic data comes in. In a research note to clients on Monday, JP Morgan (JPM) economist James Glassman pointed to the 2008-2009 recession in which GDP was significantly revised downward last year.

"At the time employment trends were much weaker than the impression left by the real GDP trends," he noted. "That was three years after the fact. With the economy now recovering, there is a high probability that preliminary estimates of national output eventually will be revised up."

Certainly that could happen, but that still doesn't capture the whole jobless picture.

The unemployment rate is also influenced by the labor participation rate – that is, the percentage of working-age persons who are employed as well as unemployed and searching for work. While labor participation has been stabilizing recently, it has declined considerably over the years. And at 64%, the rate is two perecentage points lower than its pre-recession level. As Fortune pointed out last week, the drop might have less to do with discouraged workers giving up their job hunt (as economists widely believe), but also the flux of aging baby boomers retiring and leaving the labor pool altogether.

It is bad enough that millions of people who lost their jobs during the Great Recession and are now permanently unemployed have been cast out of the statistics to make them look better, but it is abominable that these analysts then treat the manipulated statistics as if they reflect reality. The economists' precious economic models are "broken" because they are based upon faulty data...data that they KNOW (or should know) is faulty yet they insist upon using anyway.

But the most laughable statement in the article comes right at the very end:


We probably will have to wait a few more years to know what's really going on. For now, we know that the decline in unemployment doesn't just mean more people are working today.

You will only "have to wait a few more years to know what's really going on" if you have internalized the propaganda to the point where you are no longer in touch with reality. For these are The Lies We Tell Ourselves, and will continue to tell ourselves until one day when the reality proves to be too monstrous to deny any longer.


Bonus: "Watch what you say to someone with nothing...it's almost like having it all"