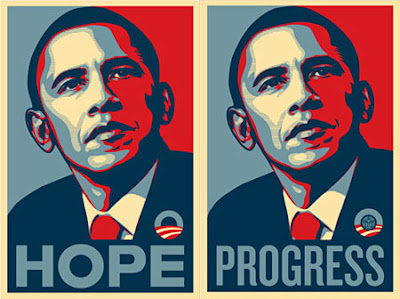 image: The Obama record, as unblemished as that of the guy who designed the original Hope poster

Now that Mitt Romney has secured the Republican nomination and the general election campaign is about to begin in earnest, it is time for me to make my official endorsement for President of the United States. This wasn’t an easy decision, as both candidates are very capable and bring a wealth of experience to the table that would help them guide the nation in these uncertain times. Mr. Romney is a successful businessman whose experience on Wall Street is invaluable to understanding the needs of working and middle class families. What’s more, although Mr. Romney could have continued in his high paying position with Bain Capital, he instead selflessly chose to enter public service and very much distinguished himself as Governor of Massachusetts. During the campaign, Governor Romney has been the voice of reason in the Republican primaries, and has refused to turn his back on his core values or change his positions despite the scurrilous attacks from his opponents. Were he not running against a successful incumbent, I would have no hesitation in bestowing upon him my full endorsement.

Governor Romney’s excellent qualifications are, however, trumped by the superior record while in office of the incumbent, Barack Obama. Taking the presidential oath in the middle of the worst financial crisis since World War Two, Mr. Obama hit the ground running and was quickly able to restore the public’s confidence in the financial markets with his aggressive actions to curtail the shady dealings of Wall Street hucksters. Even before taking office, Mr. Obama signaled that he would not be representing business as usual by his staunch opposition to the Troubled Assets Relief Bill at the height of the 2008 campaign. Mr. Obama’s boldest move was unleashing the FBI and Department of Justice prosecutors on Wall Street, who then secured indictments against the big players who were most responsible for the rampant fraud that caused the housing bubble and the resulting crash in the financial markets.

In foreign policy, Mr. Obama has been even bolder, accelerating President Bush’s Iraq withdrawal timetable and removing all American troops from that country before the end of his first year in office. Mr. Obama resisted the military’s call for a surge in Afghanistan, and instead negotiated a withdrawal agreement with the beleaguered Karzai regime. Additionally, one of his first acts upon entering office was issuing an executive order shutting down the American Gulag at Guantanamo Bay. Mr. Obama also successfully resisted any America involvement in the Libyan civil war. As a result, Mr. Obama was, as the press consensus had it at the time of his acceptance speech upon receiving the Nobel Peace Prize, the most deserving recipient of that prestigious award in recent years.

But perhaps President Obama’s most important and lasting contribution has been in being the first American President to take seriously the nation’s dire energy predicament. In his second State of the Union speech, he became the first commander-and-chief to mention the phrase “Peak Oil,” and he committed the nation to beginning to wean itself from its oil addiction by using the savings from his enormous cuts in Pentagon spending to invest in mass transportation. Showing that he is unafraid to make unpopular decisions, he stood up to the big oil lobby when he steadfastly refused to consider approving the Keystone Pipeline project, thus thwarting attempts to have that hideously polluting oil resource shipped to the U.S. for refining. Mr. Obama demanded that his justice department vigorously pursue a civil case against British Petroleum on behalf of the victims of the Deepwater Horizon oil spill, and by executive order enacted a ban against that wretched company ever again operating within U.S. jurisdiction. Mr. Obama also refused to bail out failed U.S. automakers GM and Chrysler, explaining at the time that although both firms have in the past made an enormous contribution to American prosperity, it made no sense to try to save the 21st century equivalent of a buggy whip factory.

In short, President Obama’s record as a reformer who is determined to change the country’s course at a time in which it appeared headed for disaster is unblemished. He is a visionary and experienced leader with whom America would be wise to keep at the helm of the ship of state. Therefore, it is with great pleasure that The Downward Spiral blog enthusiastically endorses Barack Obama for reelection as President of the United States.


Bonus: I'd like to dedicate this song to all of those who are planning to vote for either Mr. Obama or Mr. Romney this November