Drug War FAIL: Cocaine Is Cheaper Than Ever 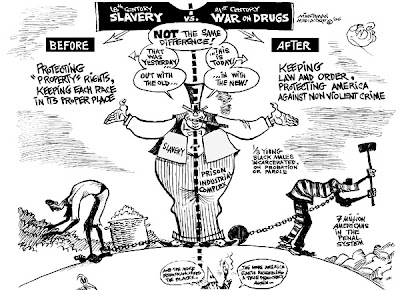 If one of the goals of the asinine war on drugs is to make them less available to users, then this is yet another example that it has been a dismal failure. Here is Slate with the details:


In laying out an argument for drug legalization in his Washington Post column Tuesday, George Will notes that the price of cocaine has dropped between 80 and 90 percent over the last three decades. Why has coke gotten so cheap?

Economies of scale. Cocaine prices are indeed much lower than they were in the early 1980s, but that’s mostly because of a precipitous change in the drug market during the Reagan era. Until then, cocaine was a small-time business, with coca leaves’ being processed in the basements of rickety houses in Colombian suburbs. Trafficking was a usually one- or two-man operation. In their early days, even legendary drug kingpins like Pablo Escobar and the Ochoa brothers had to smuggle their cocaine out of the country in their own suitcases. With the surge in demand that began at the end of the 1970s, however, the kingpins built out their empires, modernizing processing, transport, and retail networks, and managed to lower prices by more than 60 percent over the next 10 years.

It took traffickers a little while to ramp up production at first. Within two or three years, many owned small planes that could transport a metric ton of cocaine in a single shipment. (You can’t fit much more than 50 kilograms of cocaine in a suitcase.) By the end of the 1980s, cocaine was traveling on submarines and cargo ships, too. Kingpins owned sprawling processing complexes that employed hundreds of workers and could churn out several tons of cocaine per week. They concocted clever risk-spreading mechanisms. Multiple producers broke their shipment into segments and pooled them together, so that a single interdiction couldn’t deliver a devastating economic blow to any one of them. Escobar offered insurance to smaller traffickers: For a 10 percent fee, he would replace any seized drug shipments. All of these moves drove down the cost of delivering drugs to the market, and the drug lords passed those savings on to the consumer.

Since then, the price has dropped more slowly, down to approximately $140 for a gram of pure cocaine in 2007. (That’s almost 80 percent less than it cost in 1982.) Some of the continued decline is attributable to increased production and softening demand, but a large component likely has to do with changes on the retail end. According to figures compiled by Jonathan P. Caulkins of Carnegie Mellon University and Peter Reuter of the University of Maryland, around 33 percent of the price of cocaine went toward compensating smugglers and dealers for the risk of violence in 1990. Gun violence is way down since that time, so dealers likely aren’t demanding the same risk premium. (The recent surge in violence in Mexico, however, may have partially offset this trend on the smuggling side.) Technology has also contributed to the labor savings. Dealers used to have to stand on street corners hoping to make a deal. Today, they arrange their transactions in advance using cellphones. That innovation enables them to make more sales per day, and reduces their exposure to violence and arrest. Another factor is that people who have been arrested a few times for dealing have a hard time finding other work. After 30 years of widespread arrests, incarcerations, and releases, there may be a surplus of labor in the drug industry.

It should be noted that enforcement of drug laws has added substantially to the cost of street drugs, but those increases haven’t been enough to outpace efficiency gains in the industry.

Aside from the libertarian argument that what any adult chooses to ingest into their own body in the privacy of their own home should be their own damn business and no one else's, the war on drugs should be halted because of its sheer stupidity. As long as there is big money to be made by the contractors that support the war and drug companies that would lose sales if they had to compete with narcotics currently illegal narcotocs, however, that is unlikely to happen.