Professional Trolling: Meet The 20-Somethings Who Dumb Down American Politics 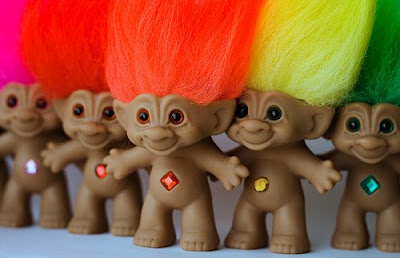 Ever wonder why there seems to be such a steady stream of fresh bullshit pumped into our ever coarsening national political conversation? Well, thanks to two recent media exposes, the awful truth has been revealed. The Atlantic Wire has the sordid details:


They're as young as they are ruthless and they're the warriors who wage Washington's political battles. Opposition researchers have been around since the dawn of politics but today they're younger, more tech savvy and arguably more bloodthirsty. Today, ABC News and Roll Call each gained exclusive access to the Republican and Democratic war rooms, respectively. What they found was a sweatshop of 20-somethings spending all day looking for the next gaffe, non-gaffe, indiscretion, or closeted skeleton. Welcome to the dirty world of politics.

Who they are In Jake Tapper's tour inside the Republican National Committee's war room, you can see the fresh-faced youths in their 20s, trying to carve out a space for themselves in this competitive field. In Roll Call's tour of the Democratic Congressional Campaign Committee's war room, you find the same age demographic of "mostly 20-somethings."

What they're looking for RNC chairman Reince Priebus says sifting through President Obama's speeches and looking for empty promises is step number one. "We've got a lot of speeches and a lot of material on him and we have to hold him accountable to the promises he made to the American people," Priebus tells Tapper. In terms of gaffe-watching, they'd like to find another Hilary Rosen moment to use against Democrats. For the Democrats' operation, Roll Call gets a lot of research details. "Do the candidates own any small businesses that accepted federal funds they voted against?" asks reporter Shira Toeplitz. "Start digging through the secretary of state’s archives. Do they have more than a few mortgages on their underwater home? A case for fiscal irresponsibility with the right documentation. Runs a construction business? Often there are lawsuits to be found." In one case, a researcher named Diana Asti found a diamond in the rough: A secret marriage. “My head just went in all different directions, like maybe they’ve divorced and he hasn’t paid alimony, or maybe he has a child and he hasn’t paid child support,” said the 23-year-old Democrat. "It was a very exciting moment.”

Weapons of choice While the Internet is key, old school shoe-leather work is still indispensable. The DCC uses a mix of "scouring news clips and YouTube videos and traveling across the country to comb through public records, all in hopes of finding a good hit," reports Roll Call. "Discoveries go into hundred-page research books on their targets that are used as bait to recruit candidates, leaked to reporters or cited in campaign advertisements and mail pieces." For the GOP, Prieubus stressed technology tools. "We - 24/7 - monitor print news, online news, TV, radio, Twitter, Facebook," said Spicer. We try to capture everything that's going on in real time so that we know what's happening ... and we're able to respond within seconds."

Work hours At the DCCC, hit squads search for eight weeks at a time and then break. The team of 20-somethings at the RNC, meanwhile are running a 24/hour operation. According to officials speaking to Tapper, they used to allow the researchers a break at 3 a.m. but now they don't stop scanning videos and news clips for anything. "Oh my God it looks like North Korea in here," Tapper remarked.

What is particularly notable about this story is that none of "reporters" involved seem at all perturbed that the national news media spends countless hours every week obsessing over the slime that these soulless cretins exhaust themselves digging up. Right here, a rock has been overturned and the little maggots who are doing so much to drive us towards our collective doom are being exposed for all the world to see. Of course, the dumbass spin to these stories is that it is all a legitimate part of the political process rather than a hideous abomination helping to ensure that it will be impossible to ever build a consensus to address the many dire issues we face as a nation.

What is truly sad is that these brainwashed kids of both political parties really believe that they are doing a service for their cause and helping to vanquish their opponents. They have absolutely no inkling that they are really just cogs in a gigantic machine owned and operated by the elites designed to distract addle-brained Americans and provide them with the illusion that they still have a real choice when they go into the voting booth. These 20-something twits provide the hateful grist so beloved by the preening freaks and charlatans who occupy the Hologram. If you were looking for a truly Americanized version of the banality of evil, you need look no further than this.

I particularly like clueless hack Jake Tapper's line at the end of the article about how the operation he is visiting "looks like North Korea." Given that America has already essentially become a one party state in which both Republicans and Democrats first and foremost serve the interests of the tiny billionaire elite over over a mass of citizens who are being gradually impoverished in order to maintain a corrupt, undemocratic status quo, he is far more correct in that assertion than he realizes.