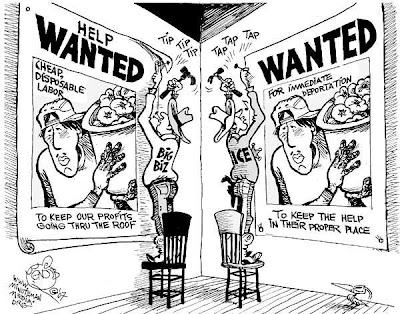 When your mind isn't clouded by partisan politics or rigid ideological dogma, it is easy to apply common sense about any given issue. I have been saying for many years that the most effective way to combat the problem of illegal immigration is not to demonize the poor souls crossing the border in hopes of a brighter economic future, but to instead vigorously prosecute the corporations who hire them. At a time of high structural unemployment, it is even more unforgivable that American employers refuse to pay a living wage and instead undercut American workers by hiring illegal aliens. And I've never bought into the bullshit that there are jobs that "Americans won't do." Offer a decent wage and see what happens. Will prices go up? Sure, but people in this Spoiled Rotten Nation buy way too much shit they don't need anyway.

Until recently, I had no evidence to back up my theories about the economic driver for illegal immigration because U.S. government policy was solidly behind the corporations and their nefarious schemes to destroy the working and middle class wage structure in this country. Which was the real reason, incidentally, that President George Bush the Lesser infuriated the nativists in his own party by not backing draconian anti-immigration laws. Yeah, a real humanitarian, that asshole.

But now, as the lingering effects of the Great Recession are dragging on, the data is trickling in that support my position. Here is the Atlantic Wire with the story:


A new study says that for the first time since the Great Depression, there may be fewer Mexican immigrants coming into the United States than there are moving from the United States back to Mexico. According to the Pew Research Center, the net migration between the U.S. and Mexico over the last five years was essentially zero, and the downward trend suggests that flow of both legal and illegal immigrants may have actually reversed back toward Mexico.

There are many possible reasons to explain the decline, but the most obvious one would seem to be the struggling U.S. economy, which has cost millions of available jobs, particularly in construction and in the South, where recent immigrants generally thrive. There have also been big increases in enforcement, deportations, and border security, although the report also says that arrests of illegal immigrants trying to cross the border has actually plummeted by nearly 75%. Whether that's because fewer people want to come here or they just don't think it's worth the risk is hard to pin down, but the number of folks willing to take the chance is definitely declining.

Given the continued hysteria over illegal immigrants and how demographic shifts might change the country in the future, many Americans might be shocked to learn that the shift is actually heading in the other direction. There have been several state laws just within the last couple of years that were passed on the premise that illegal immigration was out of control, even as the population of Mexican immigrants is apparently lower than it has been in decades. (Some might argue that the news laws are responsible for that, but the trend was clearly in place even before they were passed.) The Supreme Court will actually hear arguments this week about the harsh Arizona law that has been at the center of the debate for the last couple years, but this new evidence may put the crackdown in a new light, since the problem it was intended to resolve may not actually exist.

Gee...dry up the pool of available jobs and the illegal immigrants stop coming to America. Who would have ever thunk it? So much for the ridiculous idea that the immigrants come here to have babies who become American citizens just so they can collect welfare benefits. I daresay the average Mexican migrant farm worker is far better acquainted with what it means to perform hard labor than your average brain dead dittohead.

Consider this story one of the strongest indicators yet that America is experiencing an ongoing slow motion economic collapse. When the world's poor, tired, huddled masses no longer see our country as a great and glorious land of opportunity, but instead decide that being destitute back at home where they at least have a family and social support structure is better than being here where they are reviled just for trying to earn a meager living, the end cannot be all that many years away.