Walmart Determined To Do More Damage To Americans' Standard Of Living 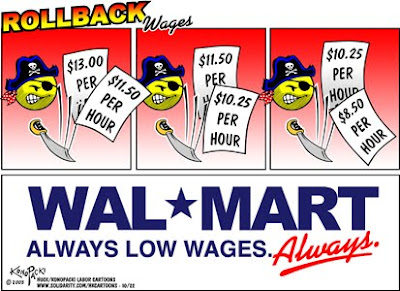 Perhaps no other single entity has done more to help destroy the average American's standard of living during the past 30 years than Walmart. The chain's maniacal insistance on lowering prices at the expense of everything else in order to increase the bottom line has made founder Sam Walton's heirs among the wealthiest people on the planet while destroying mom-and-pop businesses all across the country and helping to drive down wages in every market it has entered or touched.

It all was working out handsomely until high gasoline prices and the Great Recession hit, and distressed consumers found themselves at a breaking point in which many of them could no longer afford even Walmart prices. So what is America's most predatory retail chain going to do in response? Why, lower prices even further, of course. Here is AOL Daily Finance with the details:


Walmart has put out an APB for shoppers: "We have the lowest prices all the time. Period."

This week, the nation's biggest retailer detailed its $2 billion plan to "reinvest" in low prices, expressly in areas such as food and consumables, to drive more traffic to its 3,868 U.S. stores.

During a presentation at a CIBC World Markets conference, Duncan Mac Naughton, executive vice president and chief merchandising officer, also outlined Walmart's other key priorities: to add more nutritious and high-end food to stores, such as USDA Choice beef; rework its poorly performing clothing business; and enhance its appeal to ethnic minorities with more merchandise tailored to their tastes.

The first question I had upon reading that passage was to ask exactly what kind of horrifically bad beef Walmart is currently carrying ("pink slime" would be my guess), but the business reporter stenographer who wrote the story apparently didn't think to ask it.

The money passage, so to speak, was in the next part of the story.


Walmart's move to regain its status as the nation's bargain emporium comes in response to the rise of dollar stores, which won over large swathes of new shoppers during the recession. It's also a course correction aimed at remedying its own missteps.

Over the past three years, the retailer unleashed a bevy of promotions that muddled its original everyday-low-price message, Mac Naughton said. That led customers to begin to question whether they could still expect Walmart to have the lowest prices, he said. The promotions "fractured some of that trust," said Mac Naughton. "That's why we're so focused on consistent pricing now."

Making sure the price is right is crucial as the U.S. consumer "is still facing some significant headwinds," Mac Naughton said. Although the recession has been officially over for a few years now, 23 million Americans are still officially unemployed, gas prices are high and rising, and economic growth is anemic, he noted.

Right there you see a clueless corporate flack, touting a new policy to increase his company's profitability that is utterly self defeating. Sorry to break this to you, Mr. Mac Naughton, but Walmart has reached a breaking point in which putting any more price pressure on your suppliers is going to cause direct economic pain for the companies who supply your products, which will be passed along to their workforce, which will result in them having less cash flow to be able buy shit at your hideous stores. You and the other major vulture retail firms have finally managed to squeeze all of the excess wealth from the pockets of your beleaguered working class customers. They are tapped out...just like your awful business model. It's just too bad that they were so dimwitted as to have gone along with the program until it was too late.


Bonus: "Now cousin Clifford...he got the good land...right on the highway off of Airbase Road...looks like a Walmart...waiting to happen...I'm here to tell you it's a pot of gold"