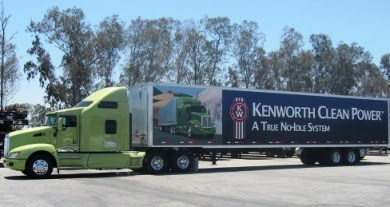 Catch the key phrase at the end of this article from ONNtv.com:


Ross County Job and Family Services were told Wednesday that the Kenworth Truck Company plant in Chillicothe would be making a significant cut to its staff, nearly 10 percent, ONN’s Denise Alex reported.

James Ford is the deputy director of Ross County's Job and Family Services.

"We made contact with the company to verify that 250 individuals were being laid off," Ford said.
Ford said that his agency is already preparing packets for those laid off employees to assist with unemployment, medical assistance and job re-training.

Kenworth, which assembles trucks, said that despite having 73 straight years of profitability, demand has recently been down.

Yet another indicator that all of the talk of economic recovery is nothing but hot air. It stands to reason that if the economy was actually picking up, the company that makes the trucks that move the goods and services would not be seeing a decline in sales.


Bonus: Sounds like the dream is turning into a nightmare