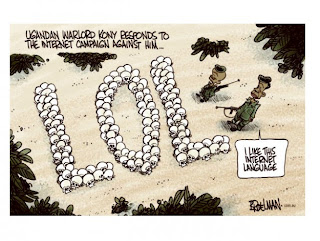 The late Andy Warhol once famously proclaimed that, "In the future, everyone will be famous for 15 minutes."  The phrase, "15 minutes," then became an overused cliche to describe the television-age phenomenon of people rising to celebrity status overnight despite having no discernable talent, or to fads and trends that have appeared out of nowhere to suddenly become culturally omnipotent before quickly becoming passe.

The rise of the Internet has actually been speeding up this cycle to the point the point of near absurdity.  One example from early this year was the overnight sensation of NBA basketball player Jeremy Lin, who in a just few short weeks this past February went from the basketball equivalent of a minor leaguer to an international superstar--only to then hurt his knee and disappear from view almost as rapidly.

Lin's astonishing rise to fame was almost perfectly matched in its timing with the appearance of the Kony 2012 video...and sure enough, that Internet phenomenon is crashing back to earth almost as quickly as the aforementioned Asian-American basketball player.  The Sydney Morning Herald has the details:


In early March, Invisible Children put a 29-minute documentary on YouTube about the plight of child soldiers in Uganda, calling for action against warlord Joseph Kony.
The group hoped for half a million views for the video. It managed almost 200 times that number in the first week alone, and switched-on under-25s deluged newsrooms and politicians with calls for action.

Higher-profile charities marvelled at the success and wondered how to replicate it. George Clooney, Justin Bieber, Barack Obama and Angelina Jolie voiced their support.

But within days a big backlash questioned the outdated facts, credentials and finances of Invisible Children. Then the star of the film, charity co-founder and Christian evangelist Jason Russell, was hospitalised for "exhaustion, dehydration and malnutrition" after being detained by San Diego police during a public breakdown in the street.

In a final ignominy, the whole event was satirised in a South Park episode last week.

It was the death knell for Kony 2012's hipster credibility, leaving only the idealistic teenage core still excited for the poster campaign.

Putting aside for a moment the questionable motives behind Invisible Children and the Kony 2012 video, what strikes me the most about this story is how consternation about the use of child soldiers in Africa to commit war atrocities became just another fad, seemingly of no more real importance to the people who suddenly became passionate about it than Jeremy Lin's momentary success on the basketball court. People were "outraged" by Kony 2012 not so much for what the video depicted but just because being outraged by it was the hip and "in" thing to do.

What is even more astonishing is just how quickly the fad itself caught on, became a worldwide sensation and then diminished into being yesterday's news.  In retrospect, the fears of those who were concerned that Kony 2012 would end up driving public pressure for the U.S. to intervene militarily in Uganda turned out to be way overblown.

More serious are the implications for anyone who hopes to raise awareness in his or her fellow citizens as to the dire and all too real issues we face in the areas of energy, the environment and overpopulation. As the article states about higher profile charities marveling at Kony 2012's success and wondering how to replicate it, in light of how quickly it is fading into memory can you really call it a success? If your motive is to actually get people to change their behavior and do something rather than just raise a few bucks, I would argue most definitely not.

Kony 2012 became an overnight sensation because it created an intense emotional reaction in its viewers, and like an emotional reaction it had no staying power.  The phenomena didn't even last long enough for it to be properly said to have had its metaphorical "15 minutes." And if "15 seconds" is the new standard for calling attention to a problem, assuming one is even able to strike that sweet spot of an emotional chord, good luck ever getting the masses to focus on the truly important issues facing our industrialized civilization as it teeters on the brink of collapse.


Bonus: Tom Lehrer reminds us that the idea of "changing the world" through mass entertainment is hardly new